Everyone wants to play that big private club in the area, and every big market has that club. San Francisco has San Francisco Golf Club, Vancouver has Capilano, Atlanta has Peachtree. For Scottsdale, that’s Estancia, Tom Fazio’s 1995 track routed up, down and around Scottsdale’s famed landmark, Pinnacle Peak.

Estancia also happens to be the first Discovery Land course, a high end residential community company that has developed the likes of Gozzer Ranch, Madison Club, Mountaintop, and more. Anyone who’s played a course from this company knows very well you leave signficantly heavier thanks to the comfort stations and abundant food options!

The opening hole is a long-ish par 4. At 459 yards, it’s no slouch, but ample room off the tee makes this a fairly generous tee shot. The hole’s architectural nature comes into play when you get to the fairway and see that the front right portion looks severely bunkered. For the ideal sightline, the player should challenge the bunker left of the fairway.

Upon arrival at the (magnificent) green complex, the bunkering short right isn’t even in play. It’s more for visual intimidation, which certainly got me my first visit to the club.

I really loved the short par 4, 2nd, maxing out at 390 yards (playing downhill). This is a sharp dogleg left, so 3 wood or iron is probably the play. It feels pretty tight from an elevated tee box, too. As seen in the photo below, two bunkers are on the inside of the dogleg, and one bunker on the outside. The left edge of the right bunker is probably a good line. 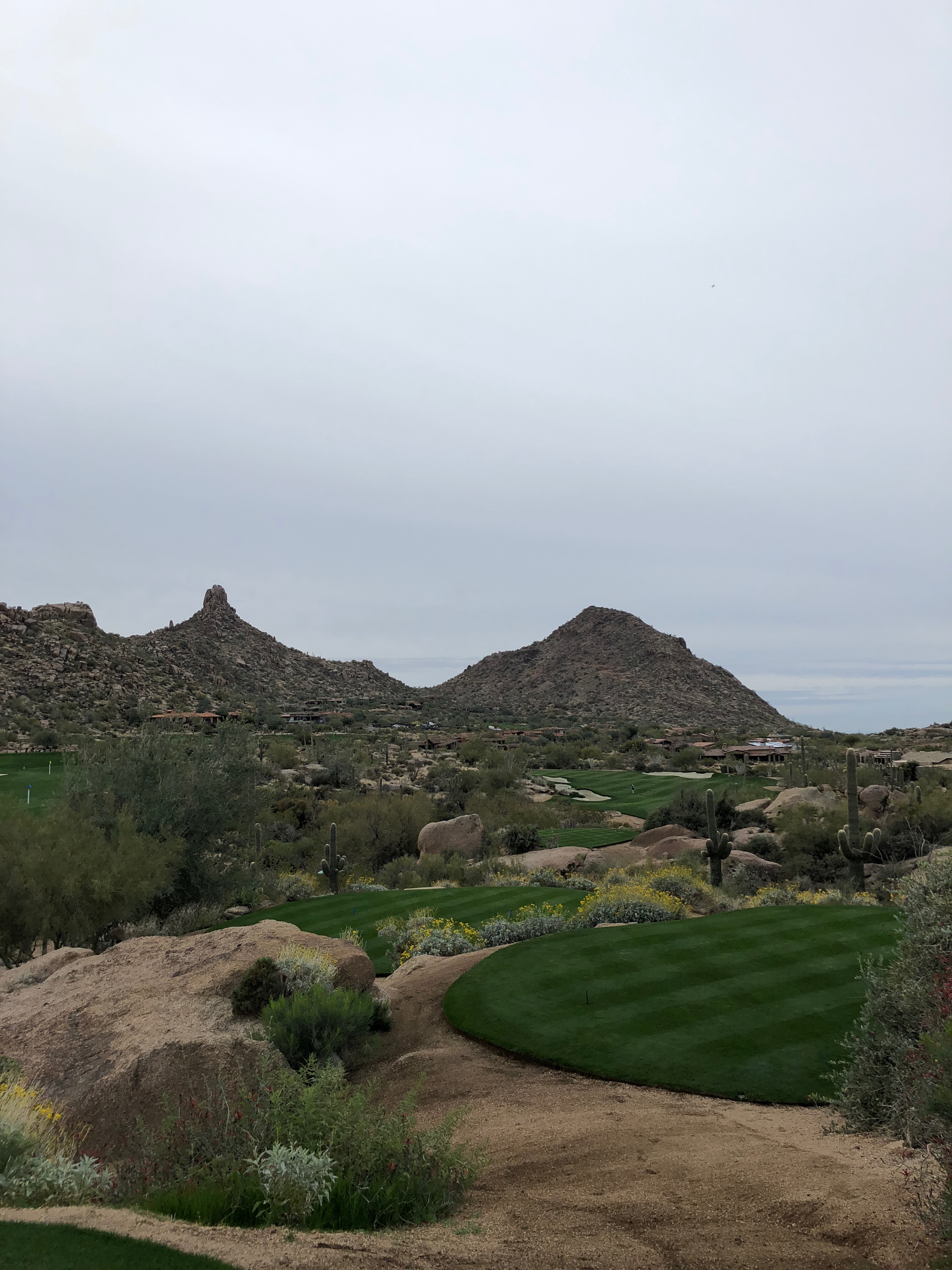 The third is a monster par 3, topping out at 240 yards. Another bunker way short makes this green look more guarded than it is. Lots of room to run it up. 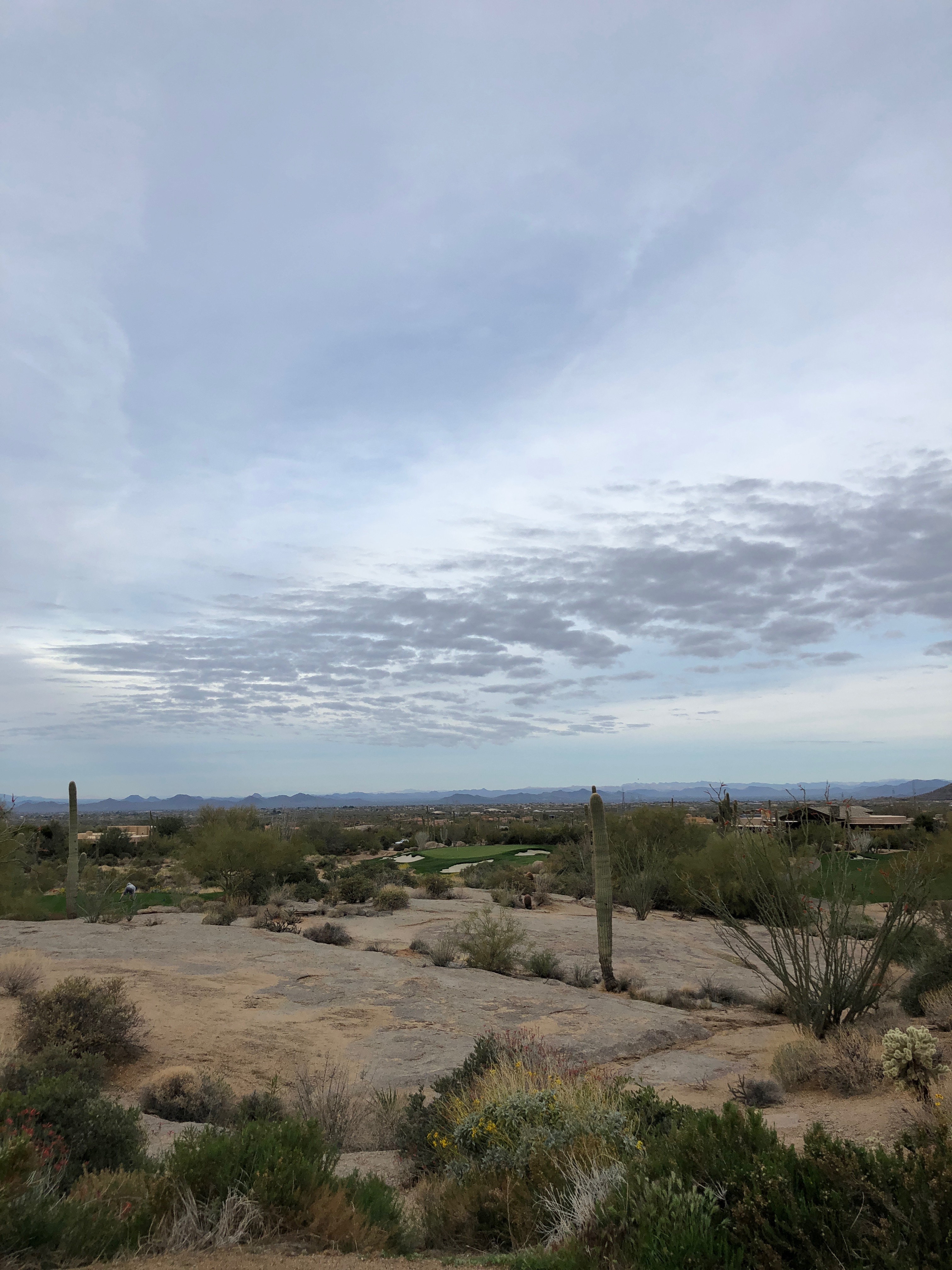 The fourth is a pretty standard par 5. Most players can probably either hit this green in two or get close with the 504 back deck yardage. 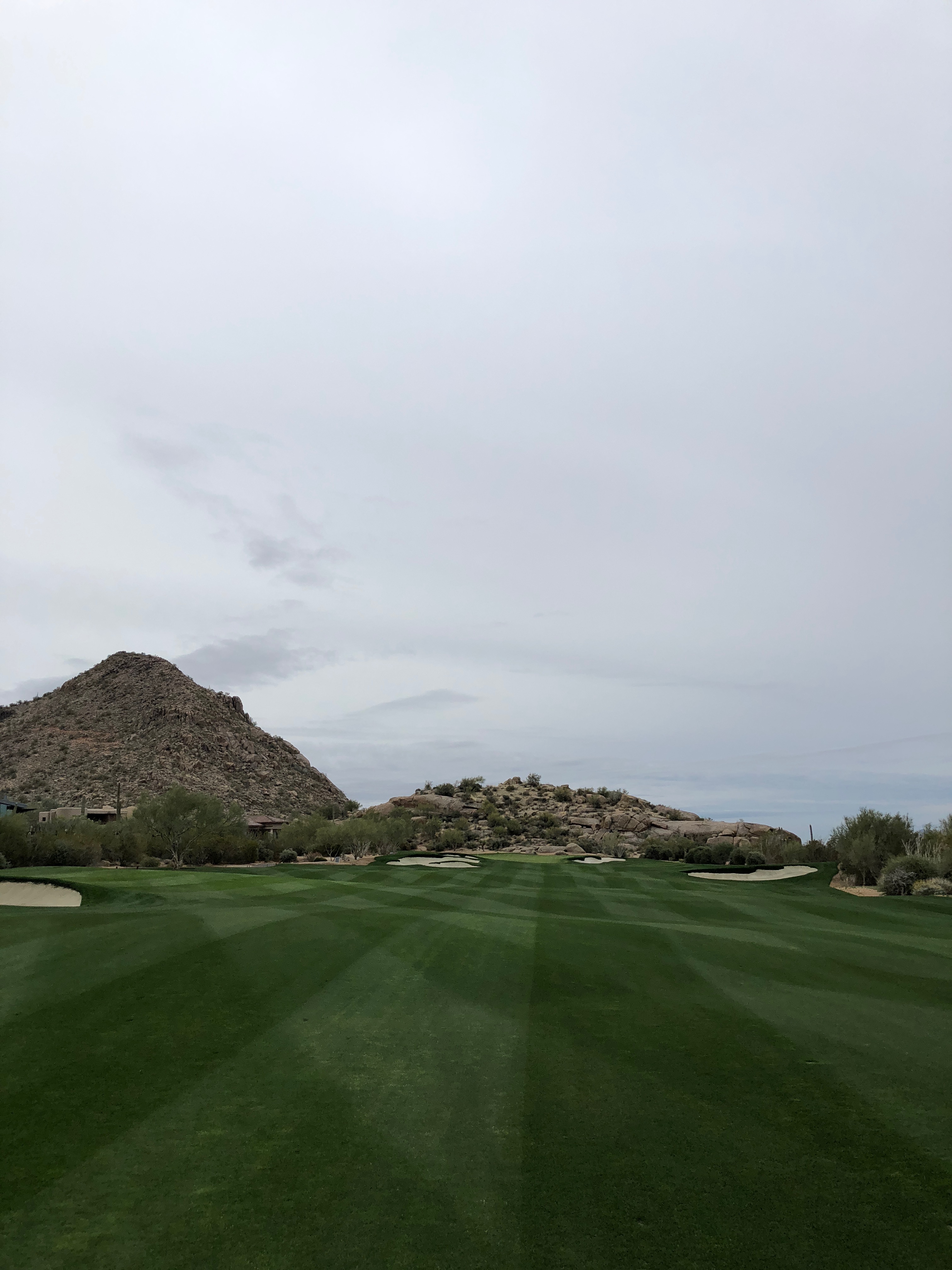 The layup was probably the coolest part of the hole, if you’re forced to layup. A bowl on the right side of the fairway makes the view obstructed if you’re down in there, so the player should layup to the left side if he can. Not often you’re forced to think about a layup shot! 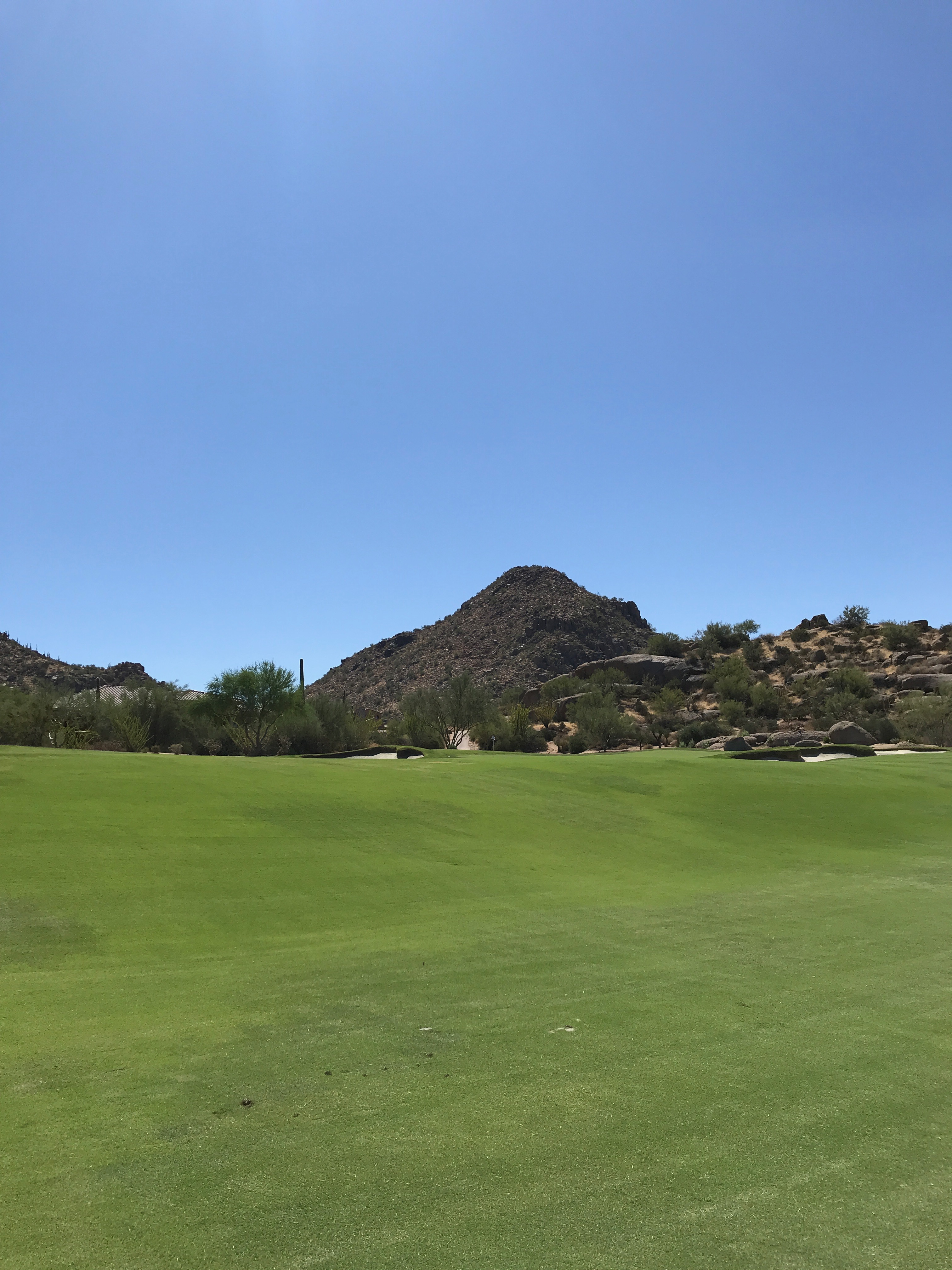 The 5th was my first “wow” moment of the round, thanks in part to the 490 yardage, as a par 4, and the elevated tee shot, with a mountain and spectacular bunkering looking onward. I’ve been lucky enough to play Estancia twice, with two different lightings so enjoy both!

The 6th tee shot is pretty awkward. You know its going to the right, but you’re not sure how far right and not really confident on the line to take. It’s only 370 yards so iron is probably the play.

The good news is the approach shot is awesome, with maybe the most interesting complex on the course.

The 7th is a great par 3 with a difficult green. The whole left side falls off, so keeping it away from the left is probably a good call. 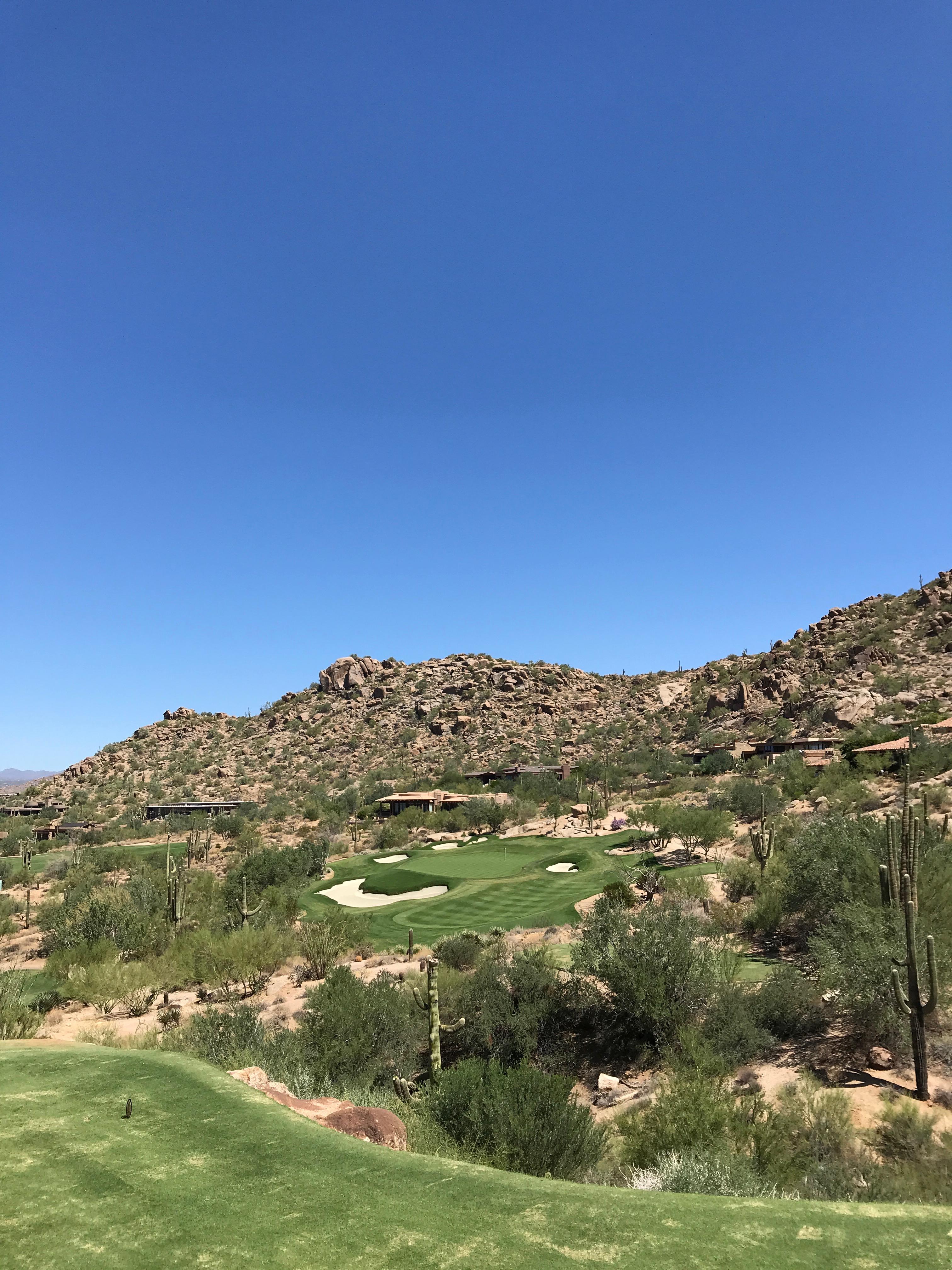 The 8th is a nice hole, but after 5, 6 & 7, it’s not really noteworthy. It is noteworthy that member Bubba Watson apparently has driven this green multiple times. Not out of the ordinary, until you realize the hole is 457 yards on the card.

The 9th is a par 5 sweeping to the right. This hole pretty much demands a fade, but it doesn’t force you to hit it. If you want to hit a draw into a fade-biased hole, it’s all yours.

The 10th features spectacular bunkering, and after a stop at the halfway house, it’s a nice change in pace, with a fairly lax tee ball playing uphill. The hole plays the full 341 yards, though, as a massive bunker short looks ready to accept any ball. 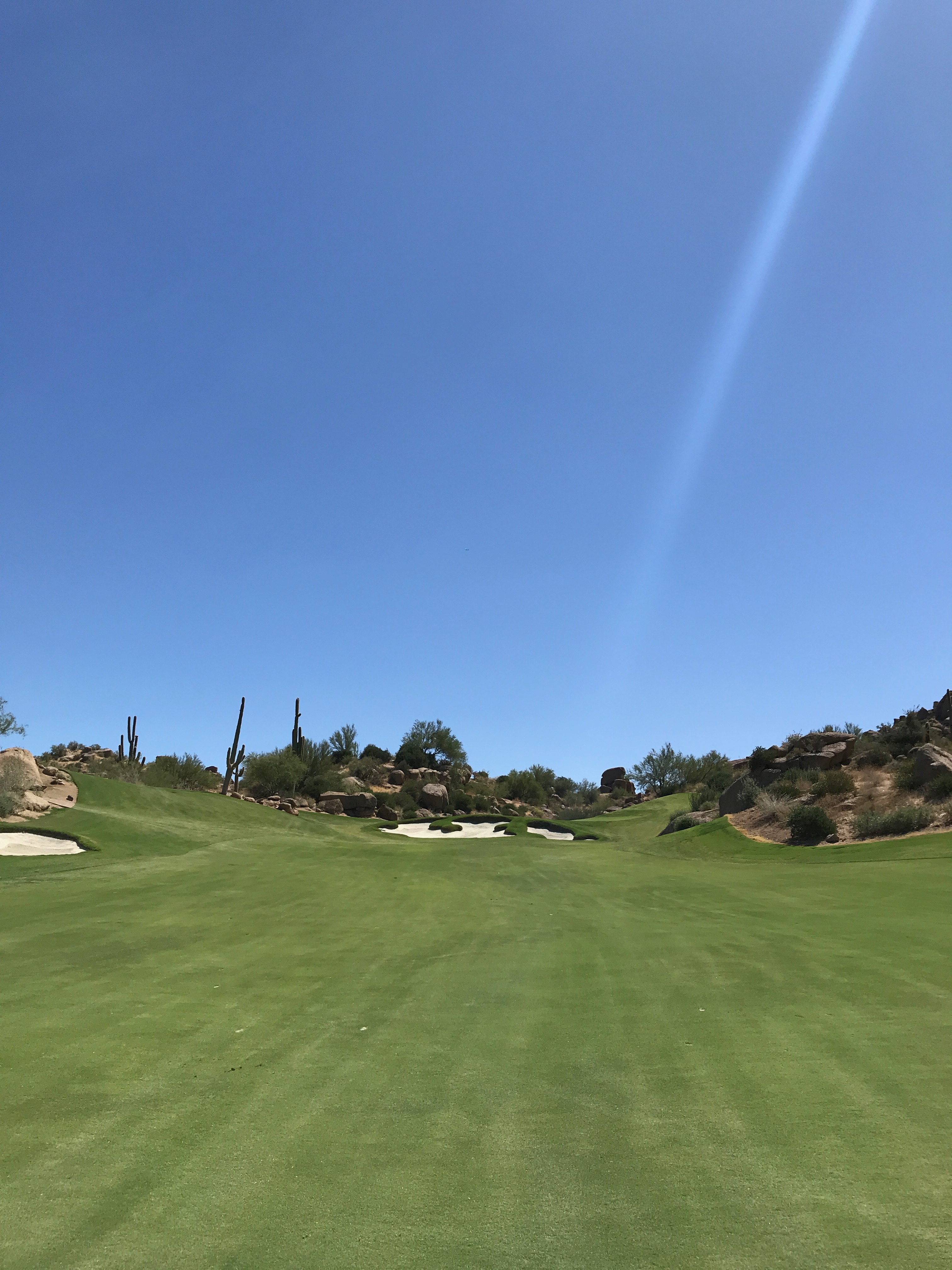 The 11th is probably the signature hole at Estancia, and is a short 3 maxing out at 140 yards. 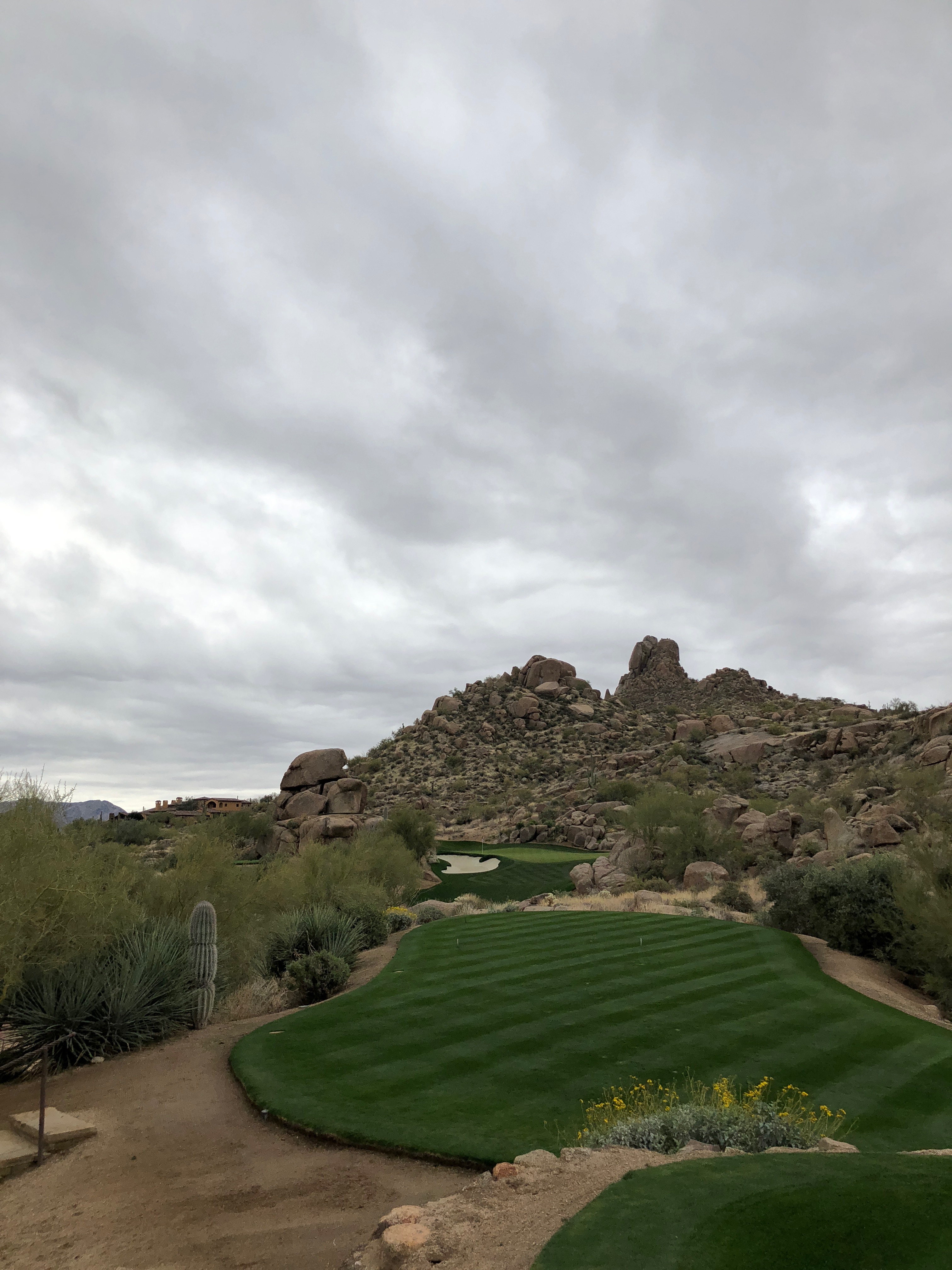 The hole benefits from Pinnacle Peak as a backdrop, but with huge rock formations surrounding this green, this hole is as charming as any.

Once you’re done 11, you get a fantastic walk to the 12th tee that is actually up on that boulder formation you see to the left of the green at 11. This is the view looking back to 11: 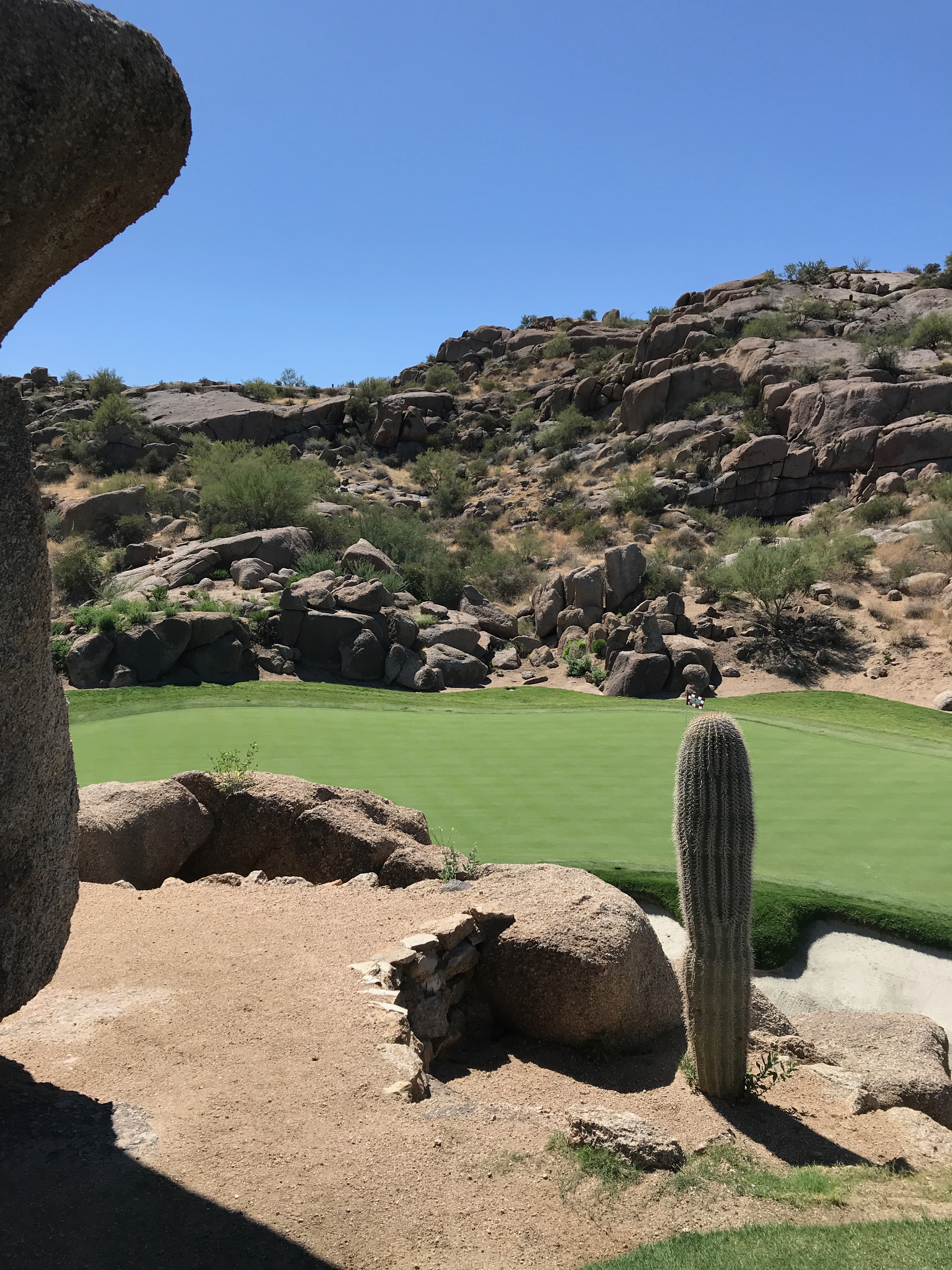 The 12th features a pretty wide fairway, and from an elevated deck at elevation the player is encouraged to swing for the fences.

A pretty common theme at Estancia is width. There’s lots of options, and there’s a lot of room to hit driver. At 7300, it’s long, but there’s so much room off the tee that it never makes a hole feel too long, and never makes a fairway seem too tight. A lot of the holes are determined by the pin location, and thus are good golf holes because you have to almost play the hole backwards.

The 13th, at 411 off the back deck, plays slightly uphill, gently moving to the left. A bunker complex is on the inside corner, but the player should try and hit it to the right side from the tee. 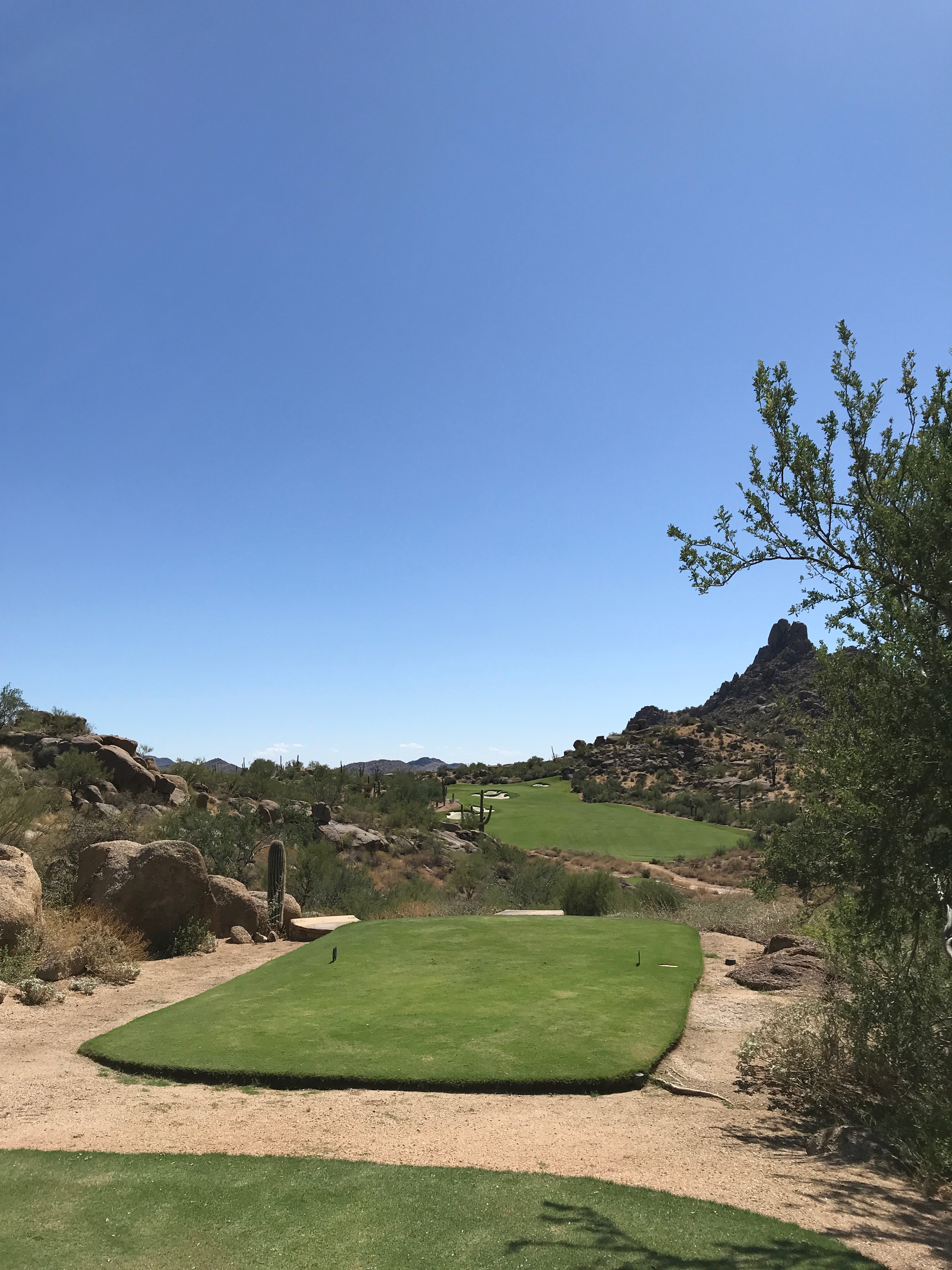 The green complex is exceptional, and swings around the beautiful bunkering short left. The green plays almost like a horseshoe green from the left side of the fairway, but from the right it plays pretty narrow until the back portion where it swings out left.

The 14th is the longest hole on the course, playing as a dogleg left par 5 at 1 yard over 630 yards. The tee shot is the hardest on the course, pinched by two bunkers on the inside corner of the dogleg left, and at a full carry of 320 or so yards, they will be in play. Both times I played this hole it played into the wind, but I imagine without wind into the face you could get there in two. The fairway slopes down and to the left towards the green, so my guess is anything short right about 25 yards will kick towards the front portion.

I didn’t really enjoy the 15th, other than the tee shot. Two trees guarded the front left and front right of the green, which didn’t really fit in with the rest of the course.

The 16th is a insane green. Bunkering short right and to the left look onwards, but the two tiered green and a back right run off area are the real difficulties with the hole. 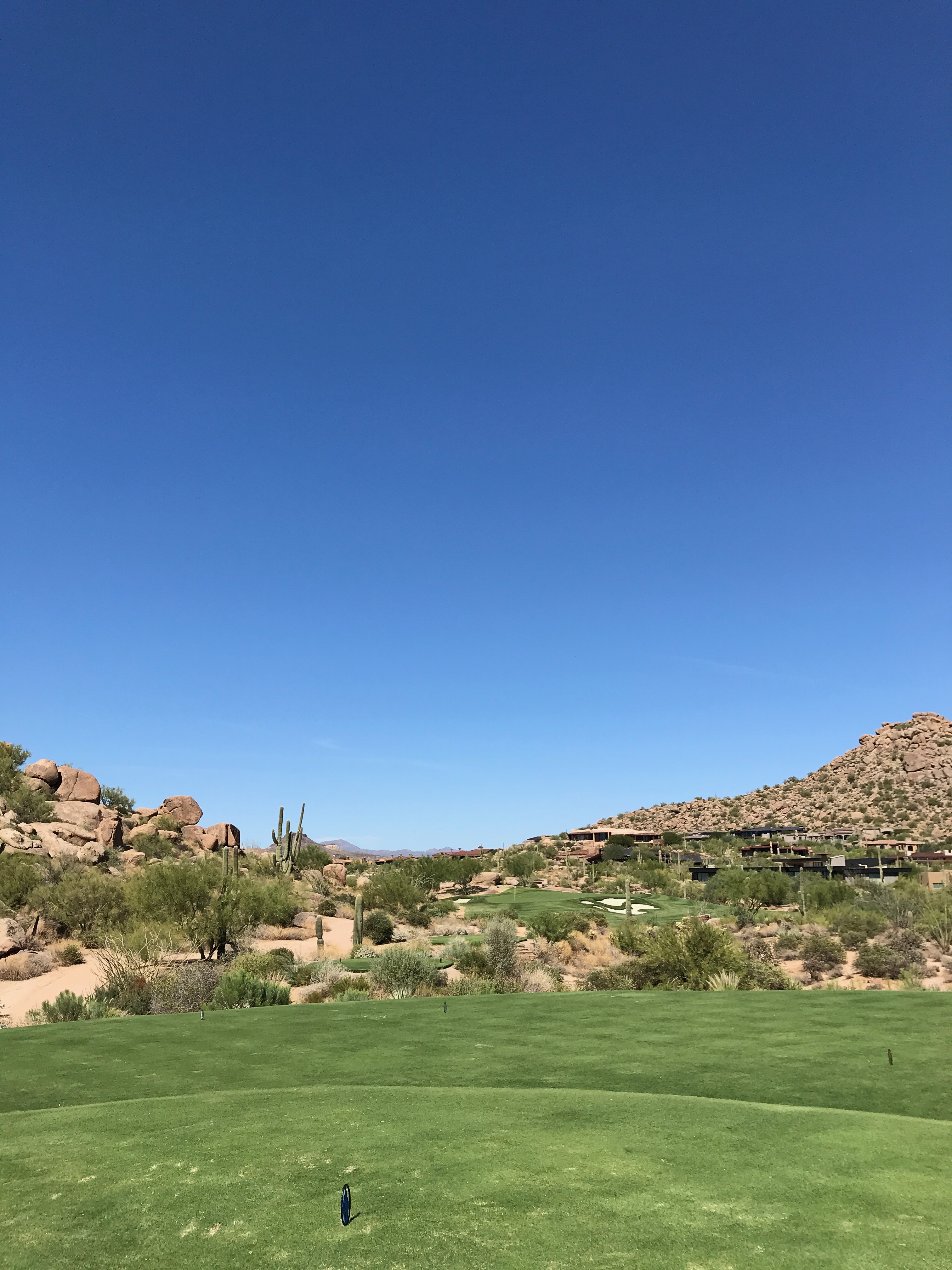 The only issue I felt with this hole is the tees could be raised for visual purposes. From the black tee box it’s tough to see the hole, so I had to go up to the blue box, above, to get a view. Even then they could be raised, but it’s in no way a bad hole.

The 17th plays 584 yards. It plays downhill, and the natural topography helps the ball bounce towards the complex.

The approach shot doesn’t feel like Arizona at all, which feels weird. every other hole features distinct desert elements but 17 doesn’t. It’s still a cool 5 though, with two bunkers on the inside corner and one green-side, this hole relies on the natural topography for architectural interest. 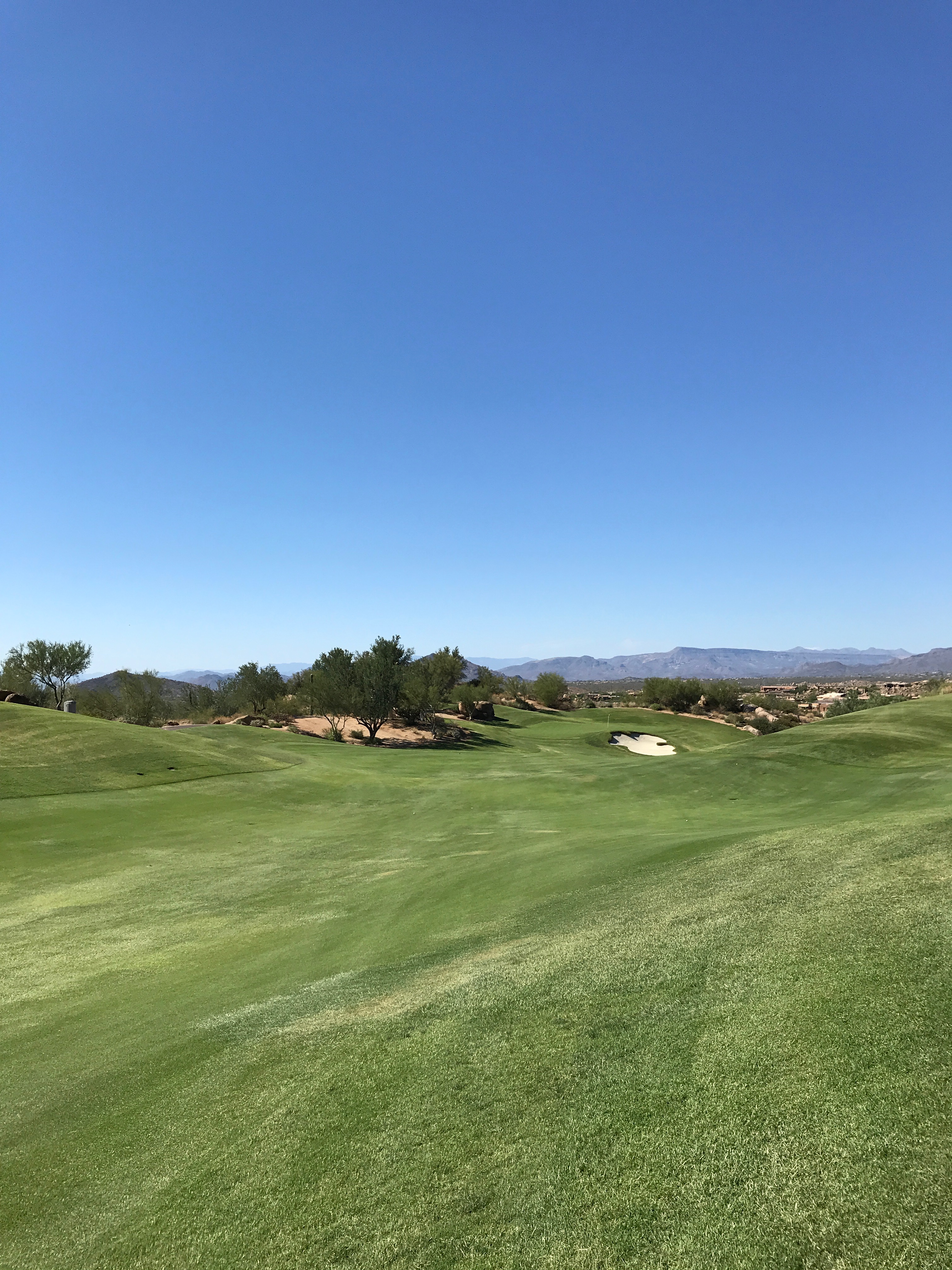 The closer is not short of spectacular. at 462 yards, it plays slightly downhill, but there’s numerous bunkers in the driving area so make sure you hit the fairway.

After navigating the difficult tee shot, the green looks guarded with bunkering, but once again they’re not really in play. They are there for looks and visual interest. There is one bunker on the right, though, so it’s not completely a bunker-less complex.

Estancia is a wonderful golf course and possibly the best desert course. Usually, they’re tight and feel very “hit or miss” with tee shots, but Estancia features lots of room off the tee, and overall is a second shot golf course. The land Fazio was given is interesting, with a routing utilizing the potential of the site.

I’m excited to play more Fazio’s over time to be able to compare it to Estancia, because this is a very good golf course. When taking a trip to the Arizona desert, one would be remiss to miss Estancia, and is worth a play, or two! Definitely get out and play Estancia if you have a chance!