The Quarry at La Quinta is Palm Springs only Golf Digest Top 100, and arguably the best in the valley. Close competition follows with Madison Club and Stone Eagle, but its hard to argue that Quarry at La Quinta is a very enjoyable round and golf course. Because you can’t miss the par 3 course here, we’ll start our review with that.

After walking past the really cool putting course, you arrive at the first hole at the short course (originally dubbed “The Quarry Ranch”) when you get the impression that this isn’t your regular short course. Unfortunately I’ve misplaced the scorecard so I won’t be able to describe the holes with yardages, but thankfully I’ve got pictures. 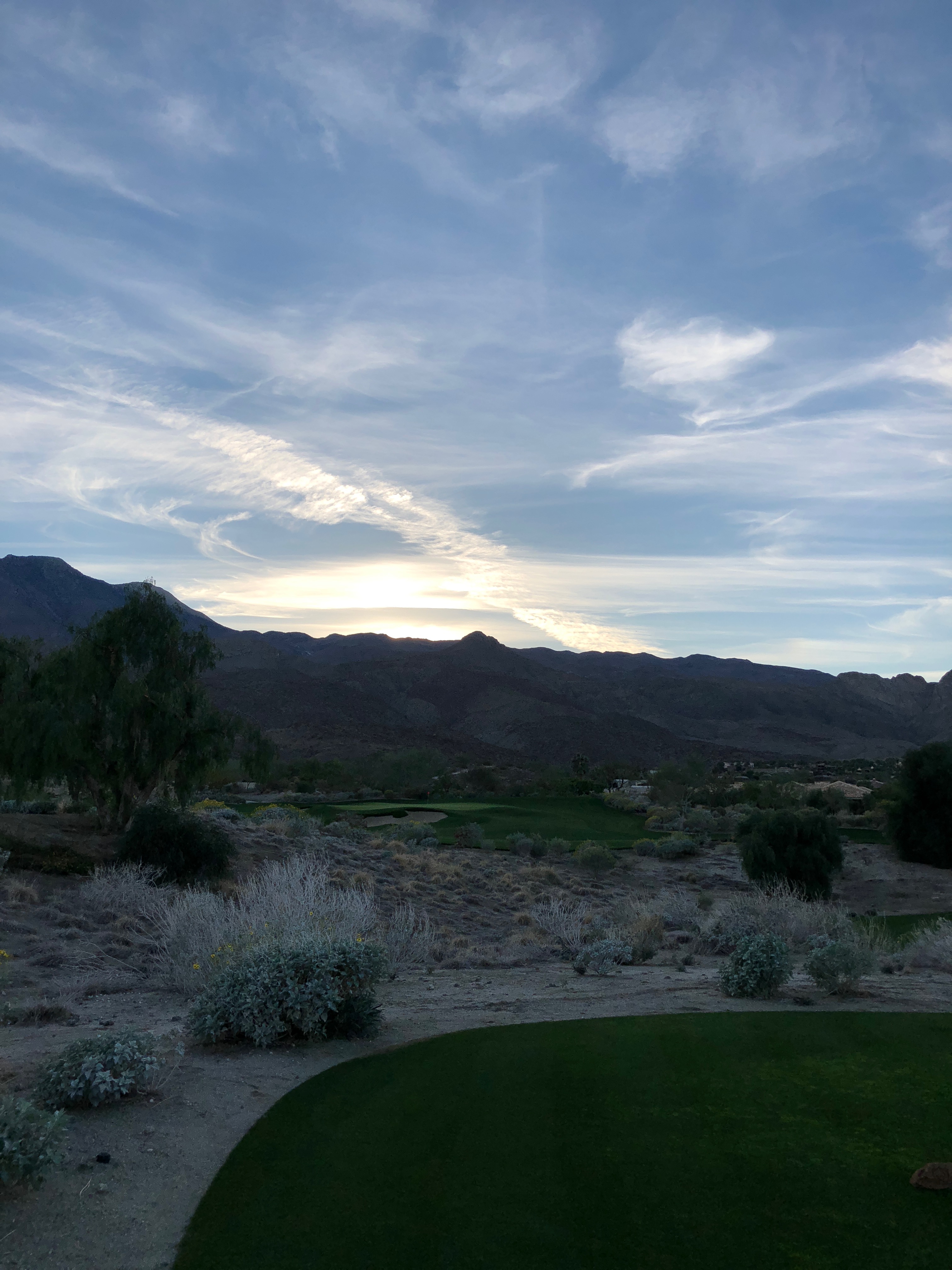 The second, if I remember correctly, plays somewhere close to 180 yards. What I liked about the short course here is it’s not a bunch of pitches; there’s holes here up to 211 yards, and as short as 110 or so yards.

The third, another mid length 3, features a deceptive bunker short right that isn’t in play, but it’s more for visual intimidation. 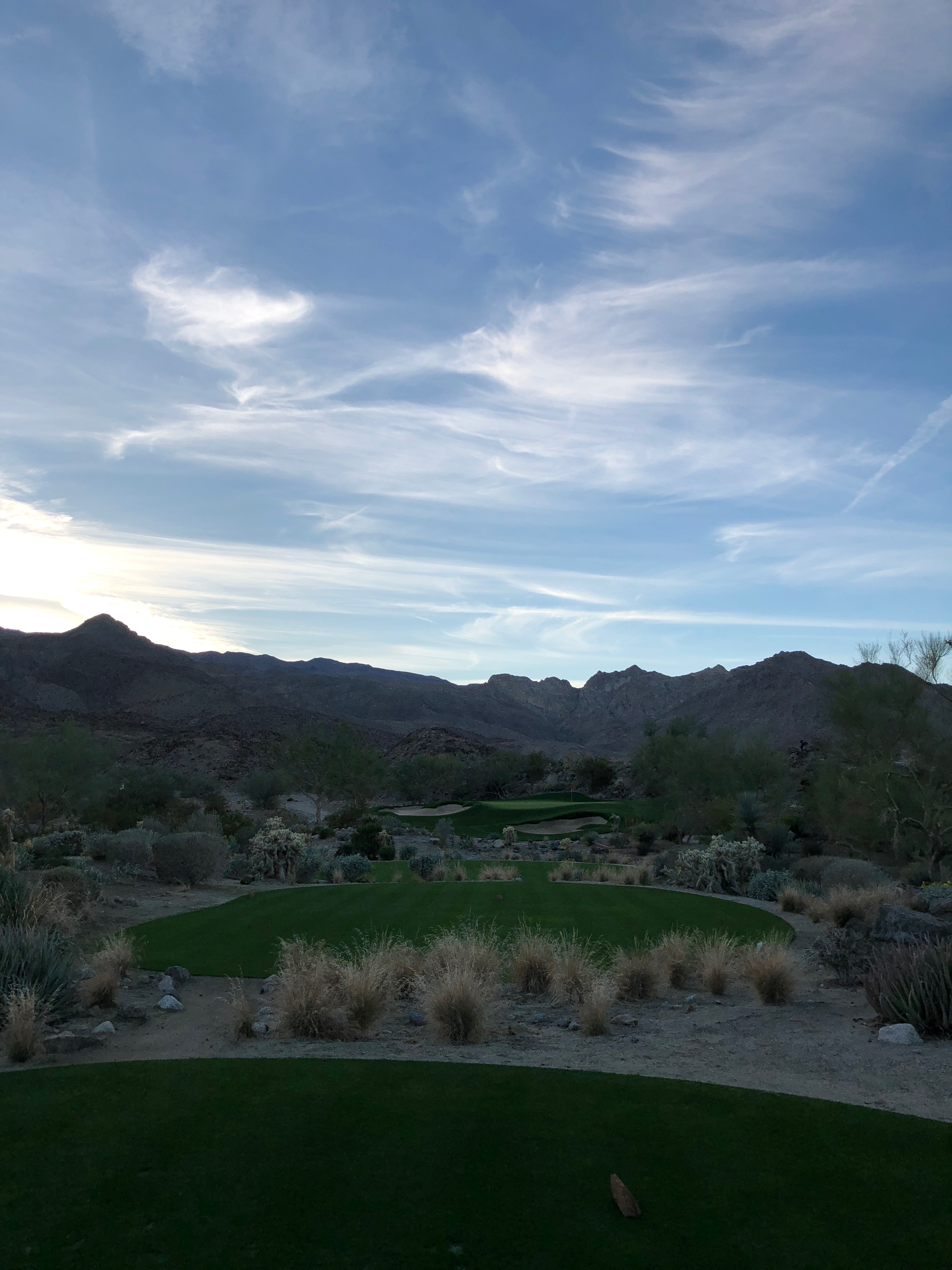 The fourth was a spectacular par 3. Fairly short at 160 odd yards, it plays slightly uphill with a creek and beautiful bunkering. I felt like this hole was actually better than one, maybe two 3’s on the actual course! 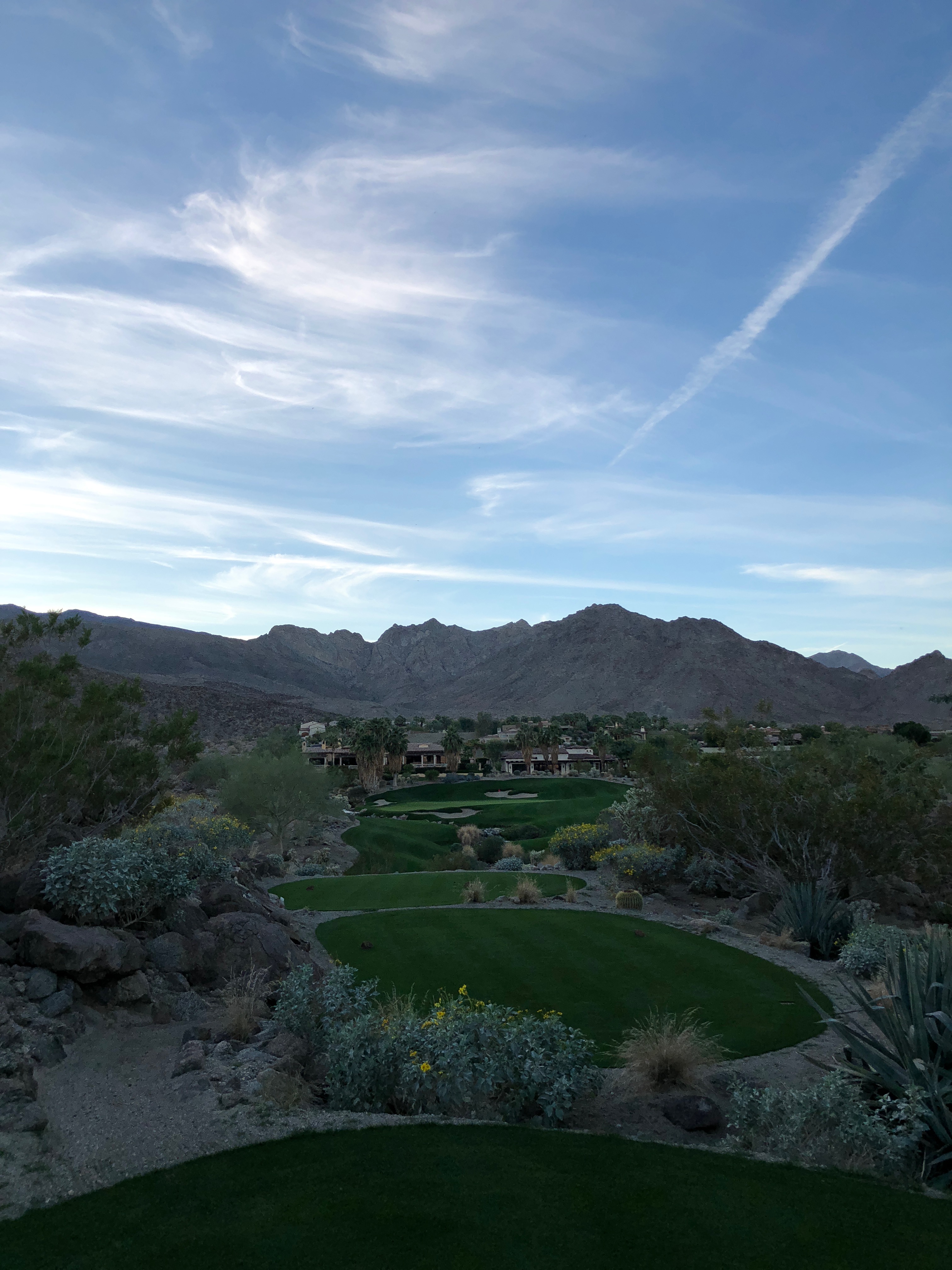 The fifth is just a pitching wedge or so, playing near 135 yards, playing down the hill you just came up on the fourth. 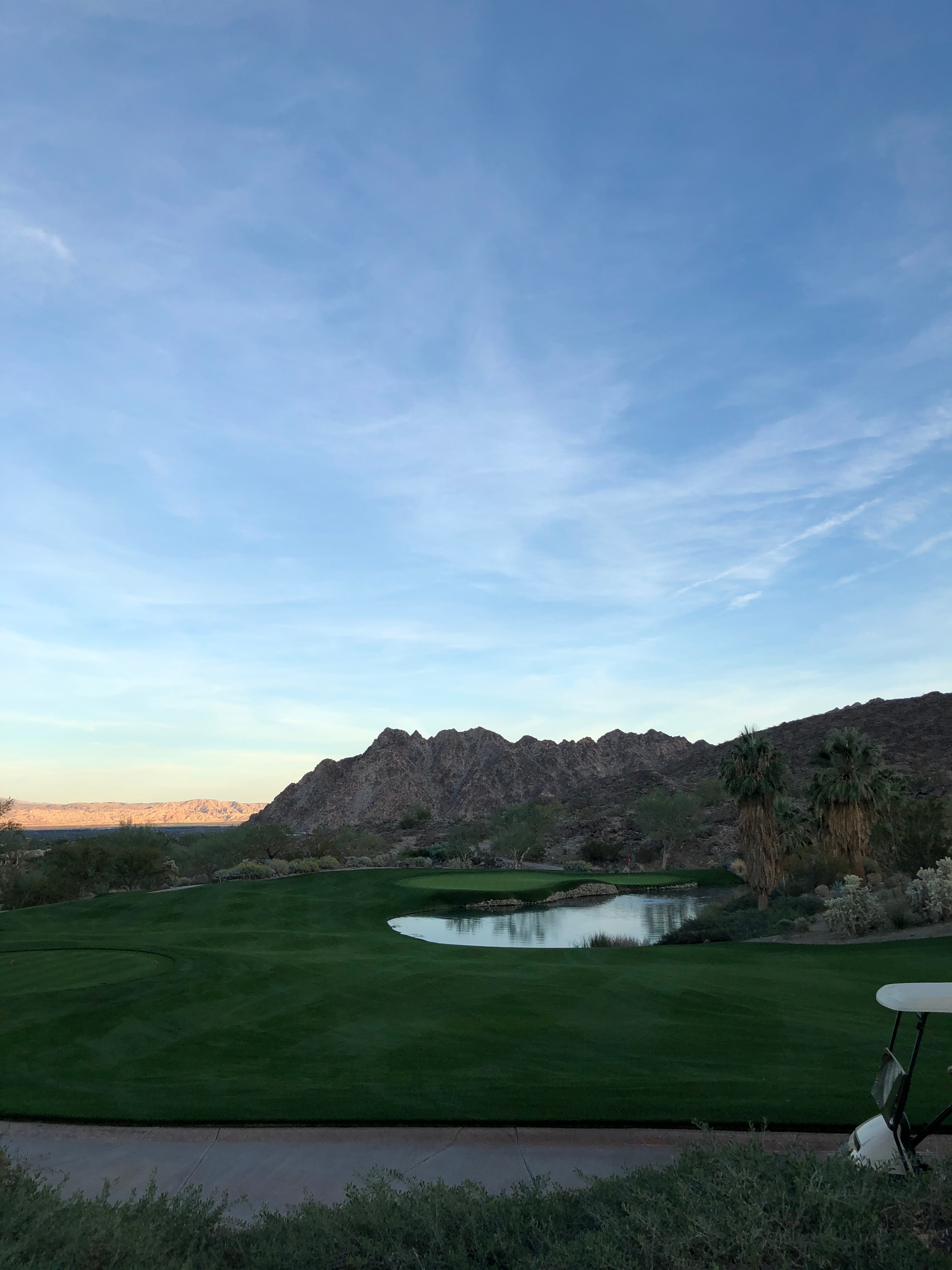 At the rock wall you see near the middle of the green is a ridge that dissects this green into 2, making it easier, or harder, to get to a back right pin.

The sixth is a lovely par 3 framed by bunkering left and right. The green is pushed up, and makes the hole stand out with a desert background. 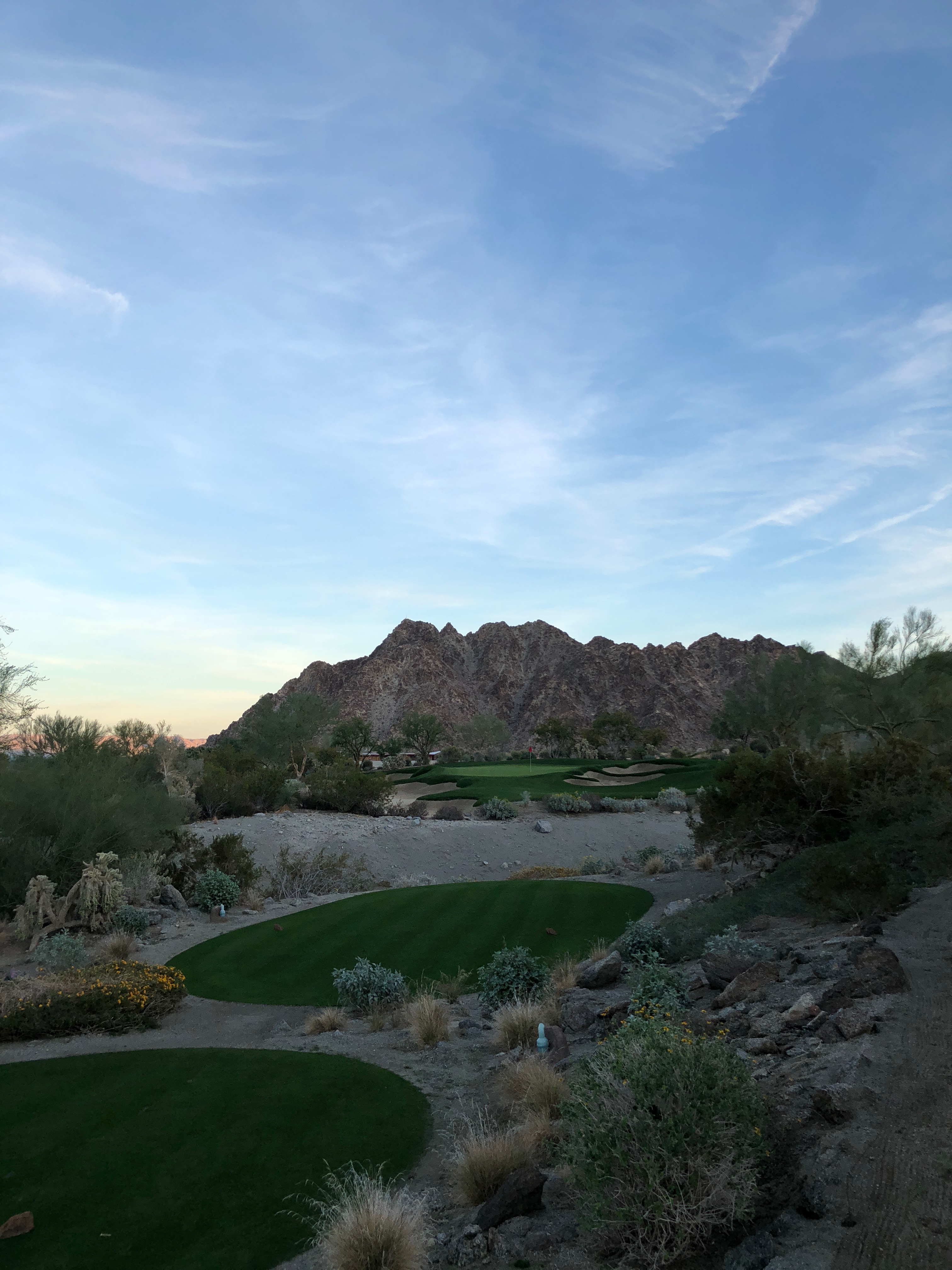 The 7th is the longest par 3 on the course, playing near 210 yards. A pond is short, meaning you have to get all of it.

The 8th is a beautiful hole, and is all about distance control. The green is extremely wide, and almost plays as a side Biarritz, with two levels on the left and right, and a swale in the middle. 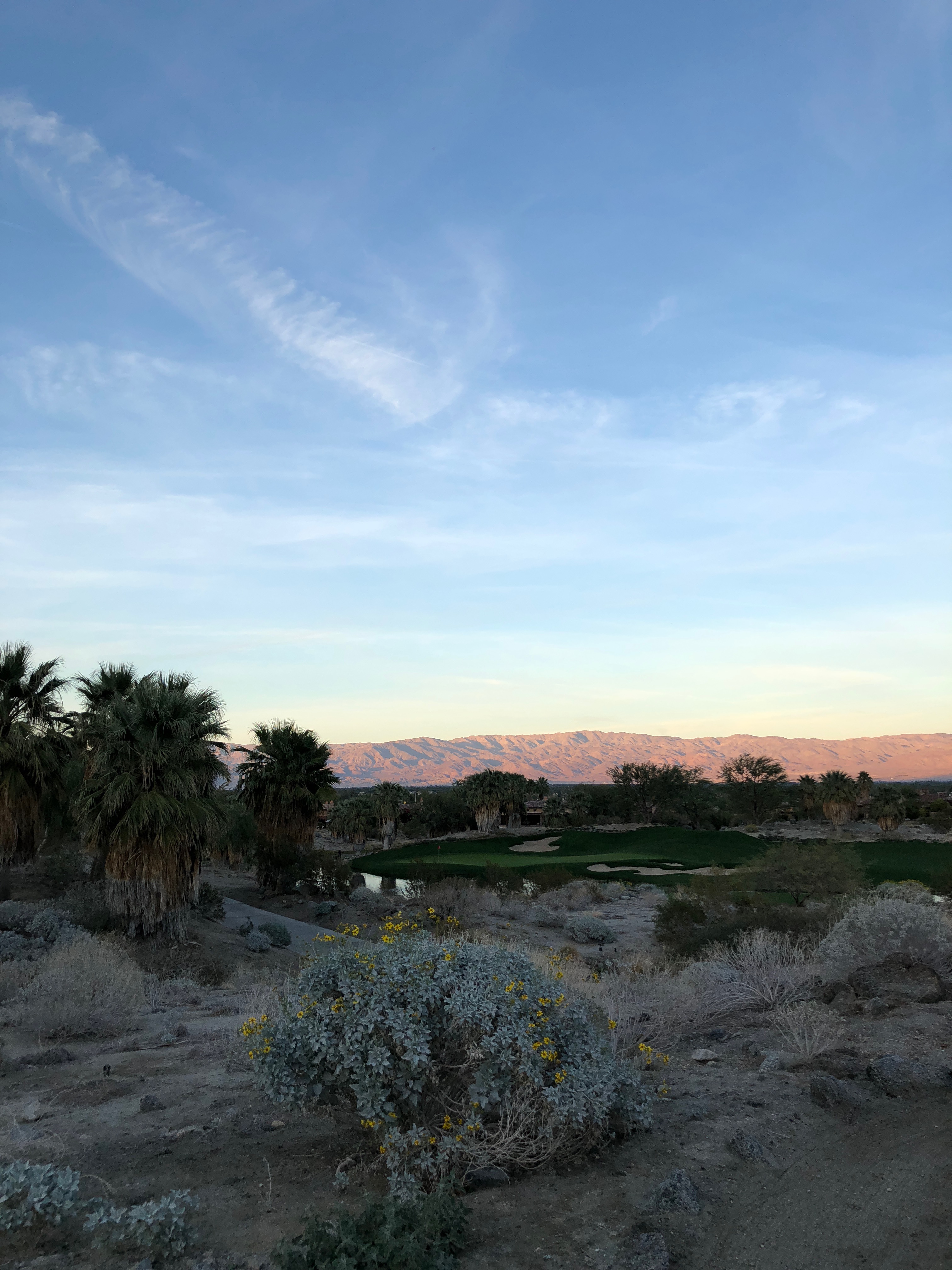 The different tees wrap around this hole, making for different locations. From the front tee, this hole plays completely different than the back tee than the forward tees. 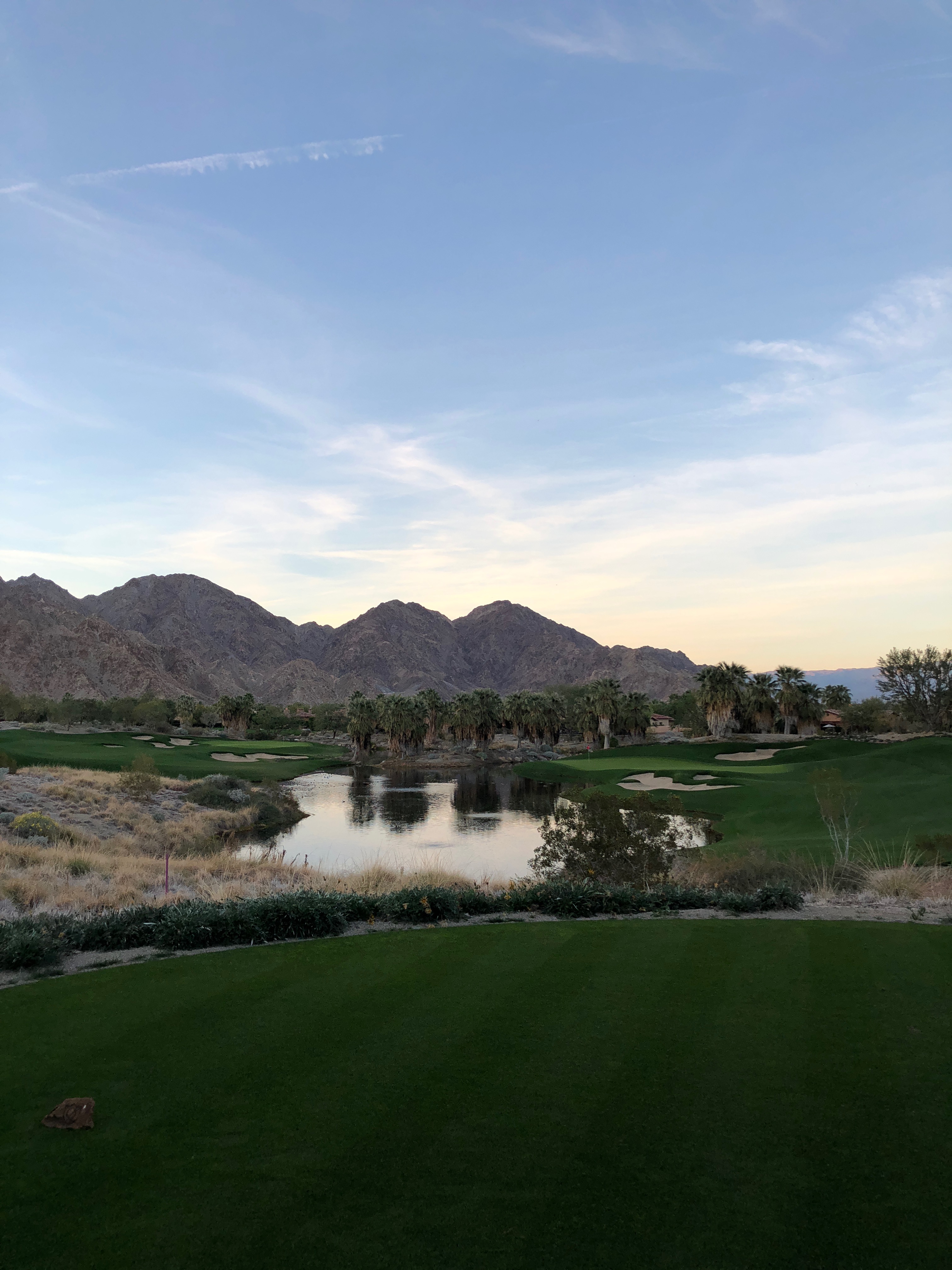 From the front tee, it plays closer to a traditional Biarritz. It’s the first view of the 9th as well, and features a cool design element that the 9th green is also designed as a par 4 from the 8th tee. 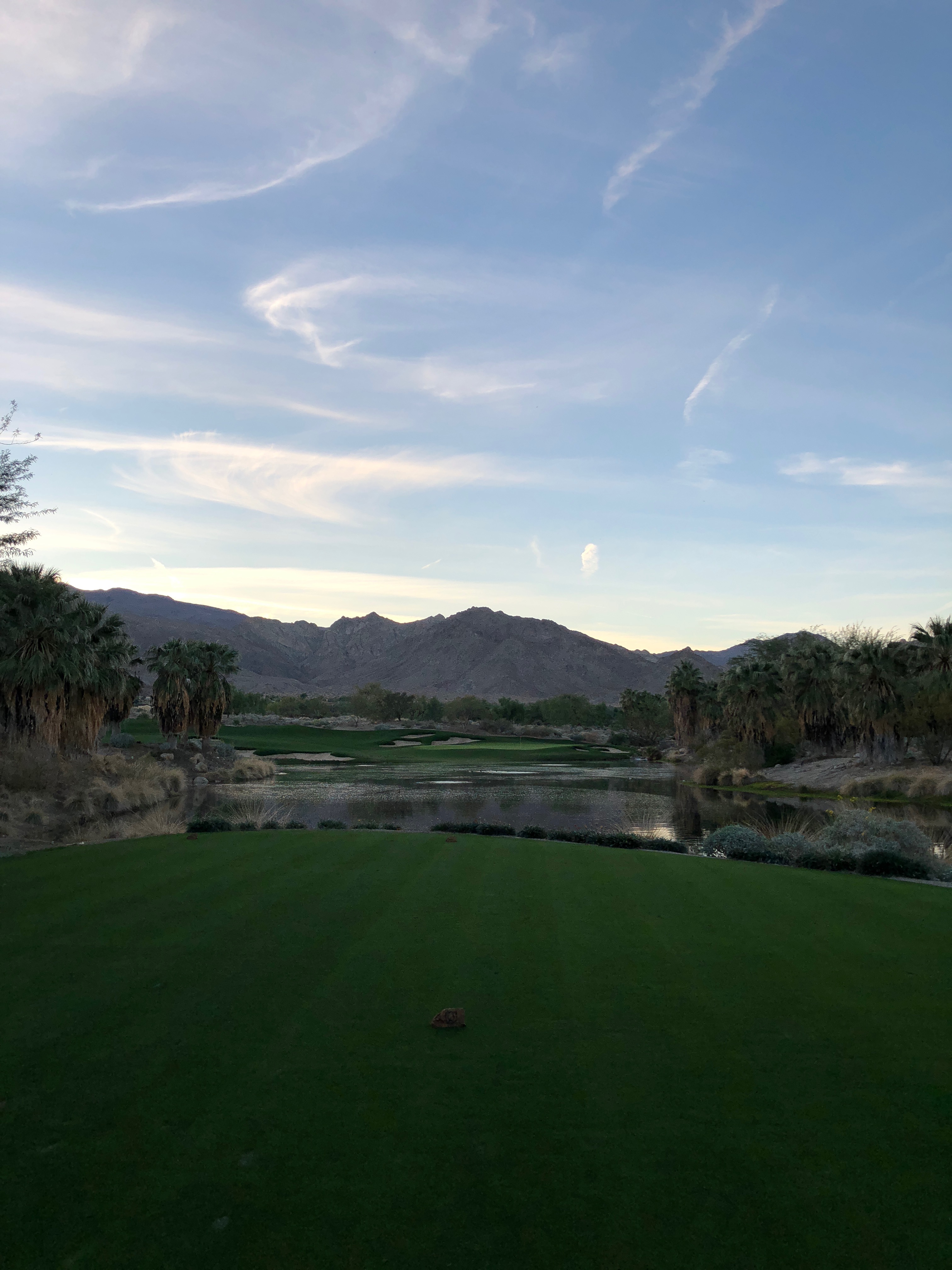 The 9th, above, plays a full carry over water. If I remember it plays close to 200 yards, but there’s lots of room to bail out left.

The 10th is the final hole, and is pretty much just a “well, why not put it in”. It’s the least eventual hole here, but doesn’t mean it’s bad. It plays up the secondary driving range that Quarry uses for tournaments. 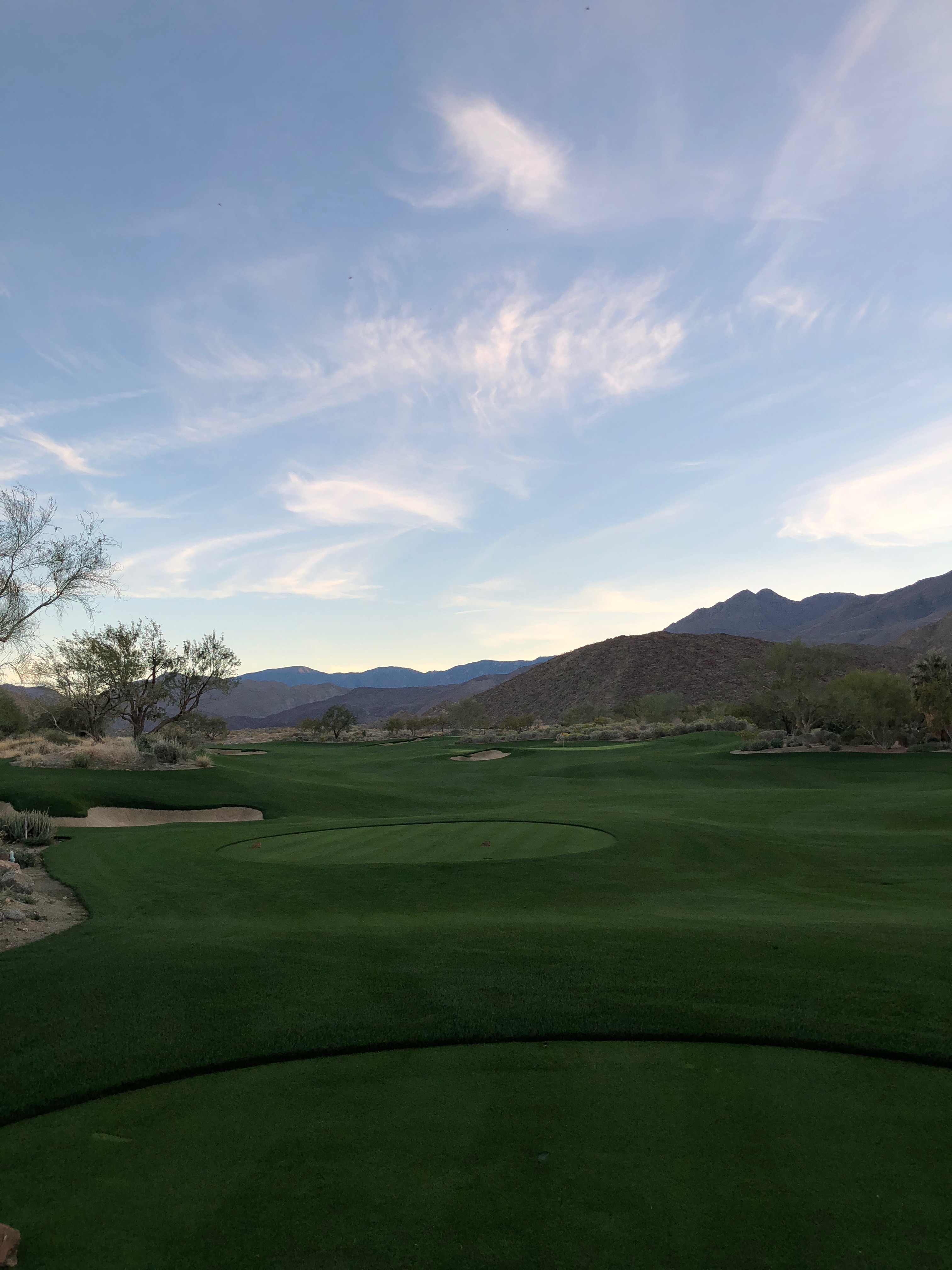 After the par 3 course (we did it after), it’s time to head to the actual golf course.

The first is a dogleg to the left par 5. It’s fairly short, only at 530 yards, but plays down and up some interesting land. 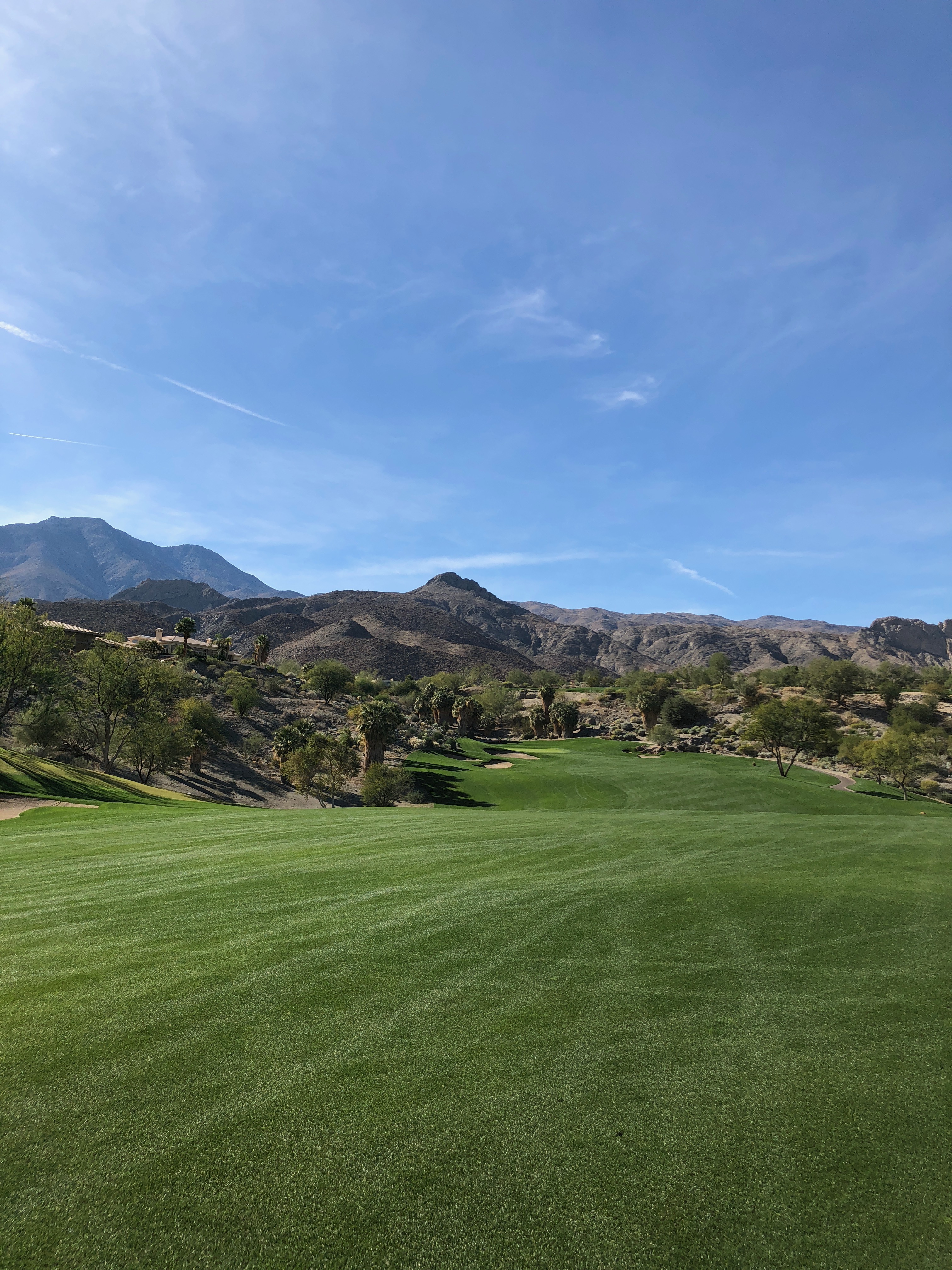 The bunkering on the inside corner of the dogleg near the green makes it difficult to get there in two, especially with a long iron or even wood off the downslope. On the second swing of the day it might be a big of a gamble.

The second is a cool par 3 on the upper shelf of the property. It’s a longer par 3, at 202 yards, but there is room left to miss.

The third is one of the better holes on the property, with a sharp drop off to the left of the hole the entire way. It’s a good short par 4, playing a yard over 370. 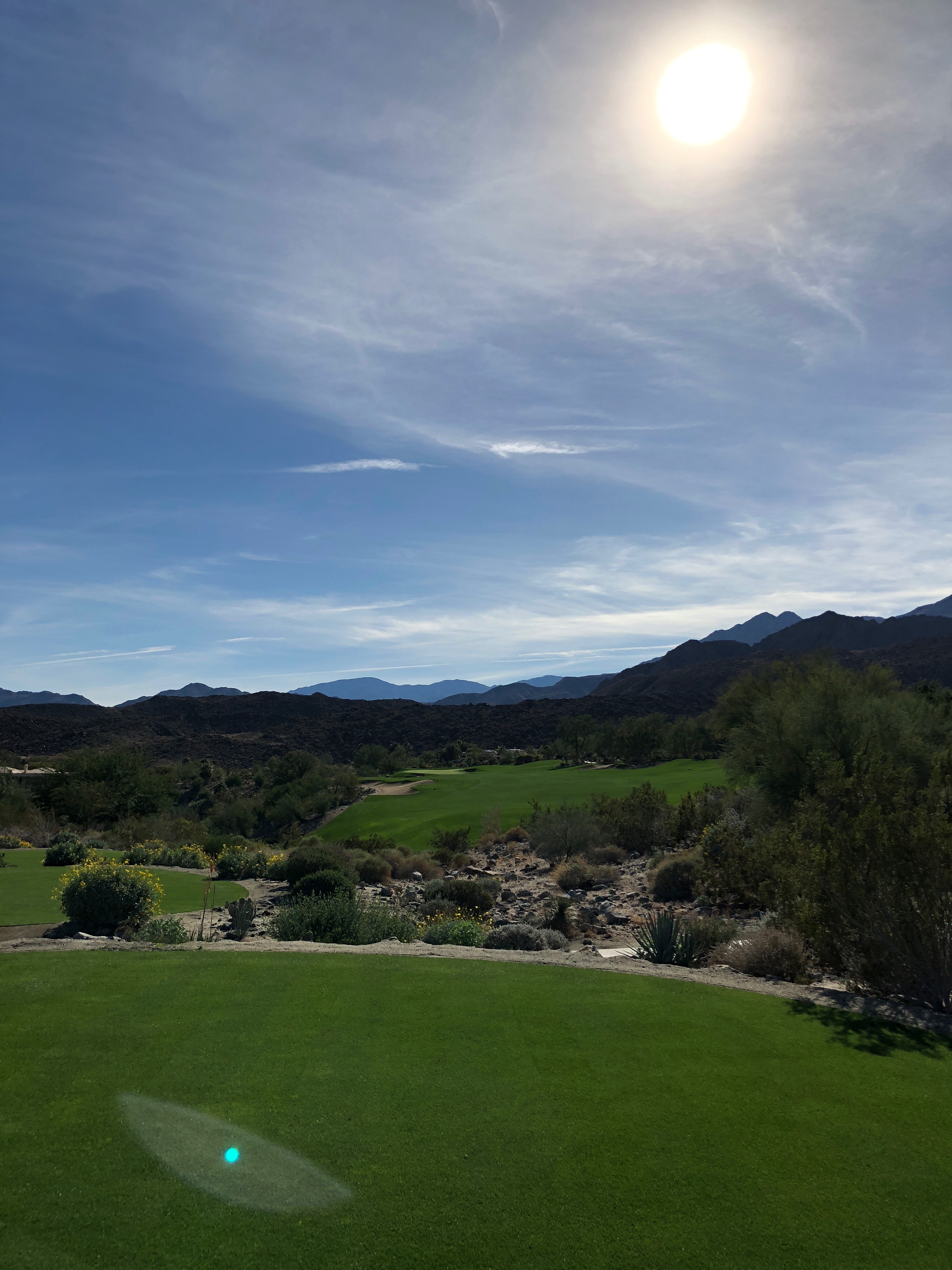 The approach was awesome, with a two-tiered green and a back tongue area. The left desert wash is in play, as well. 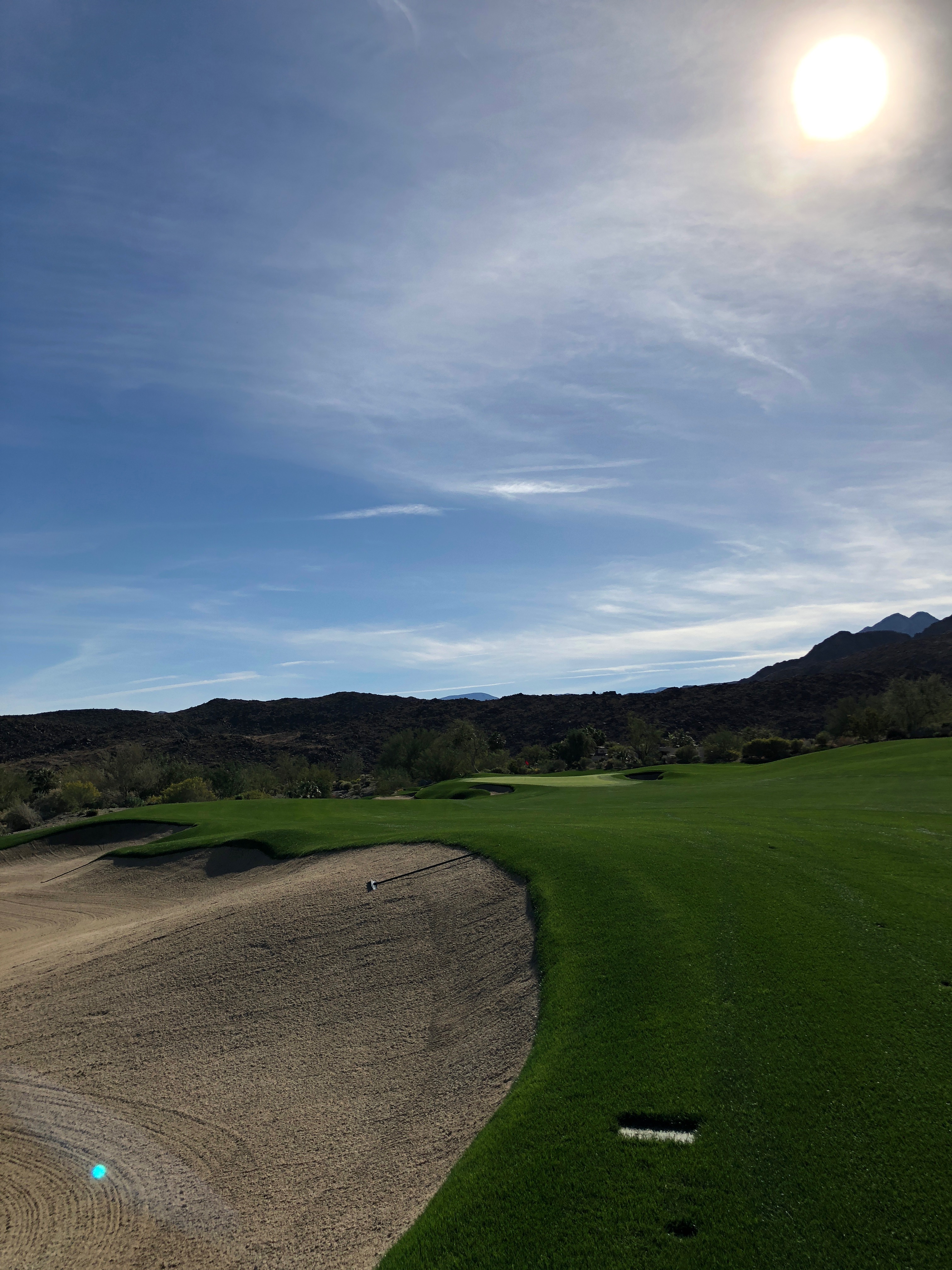 The 4th is another shorter par 4, playing 385 yards and moving to the left up the slope. Bunkering guards the left inside corner, so playing just short of them is likely a good call.

The 5th is certainly memorable because it’s the only hole with dormant rough. I’m not sure why this is a thing, however, the assistant pro we played with said Tom Doak came here and suggested to the club that overseeded rough would help define the hole a little more. 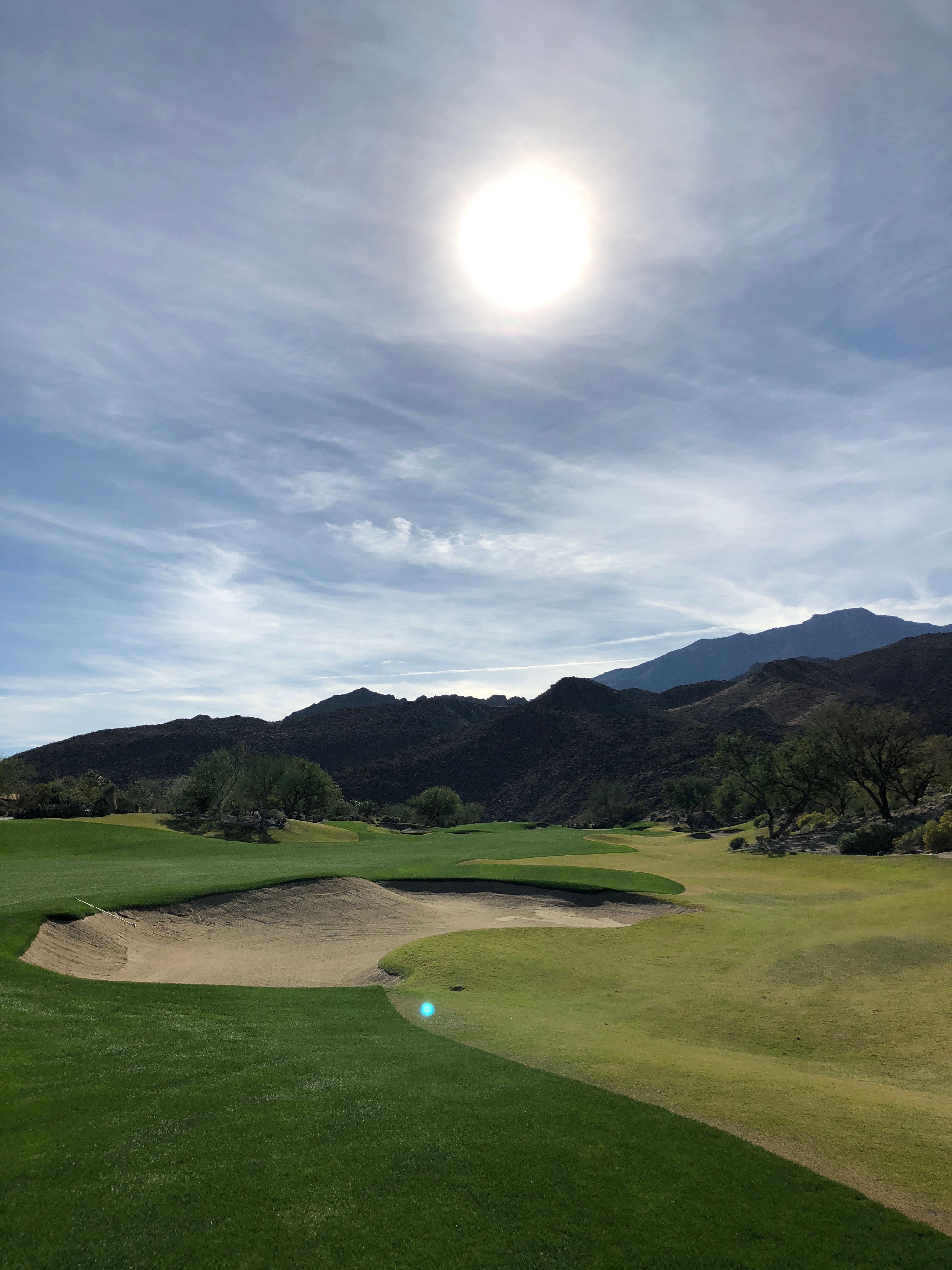 It’s a fairly reachable par 5 at 529 yards, so bring a fade and swing away so you can get home in two!

I felt like the 6th was fairly forgettable. A fairly straight hole with a bunker left in the fairway and a bunker short right of the green. To the left of the green slopes towards the complex.

The 7th is a mid length par 4 (424 yards) playing downhill. A stream runs up the left side of the hole with a bunker complex right side of the fairway. 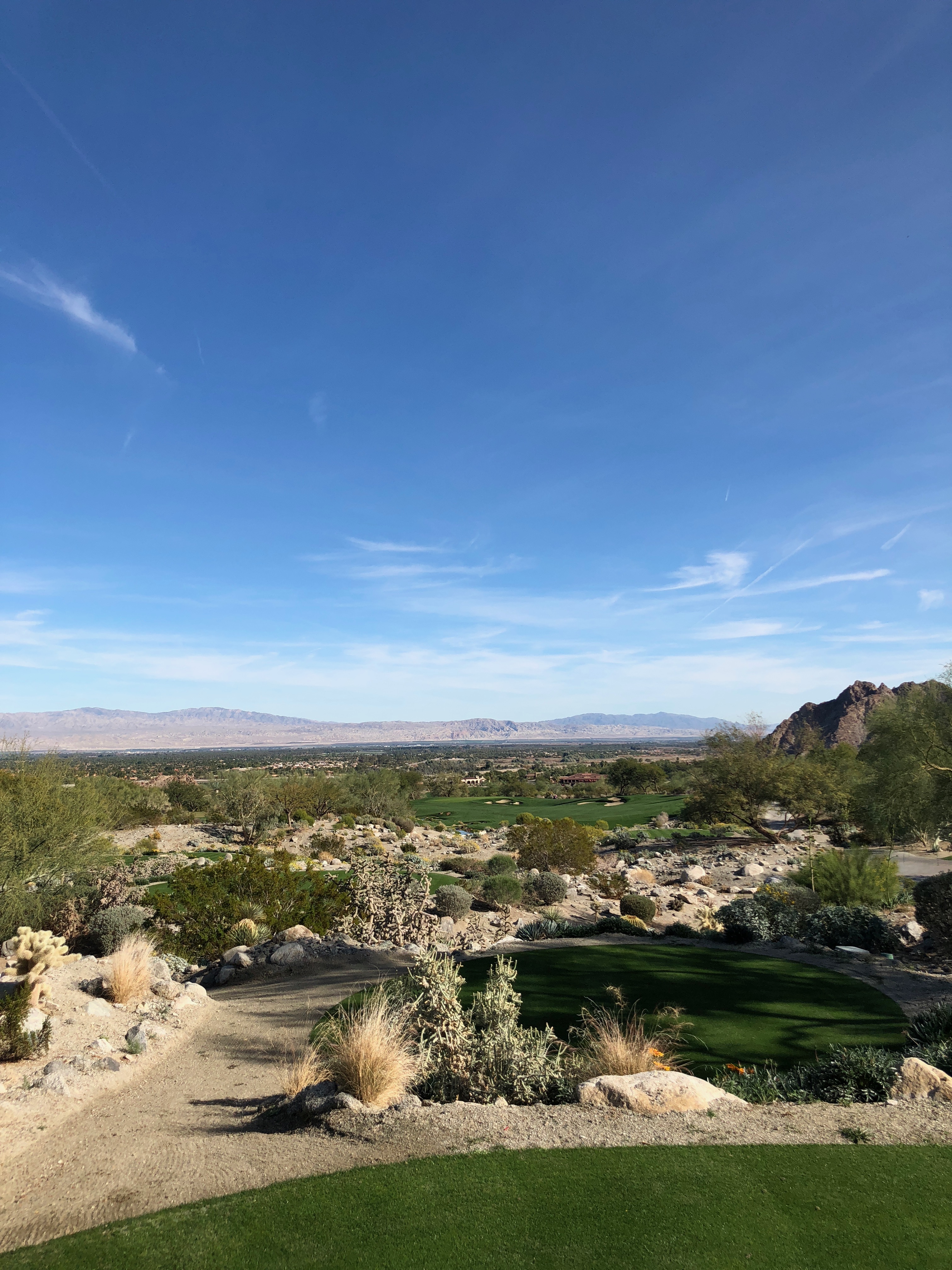 The approach features a lovely view of the Coachella Valley.

The 8th is a nifty little drop shot par 3. It plays virtually the same from every tee box: 143, 138, 124, 121. The club doesn’t follow these every day, either, and move the tees around to give different looks and angles for each box. I think the day we played from the blacks, but the blues and whites ended up playing behind us. 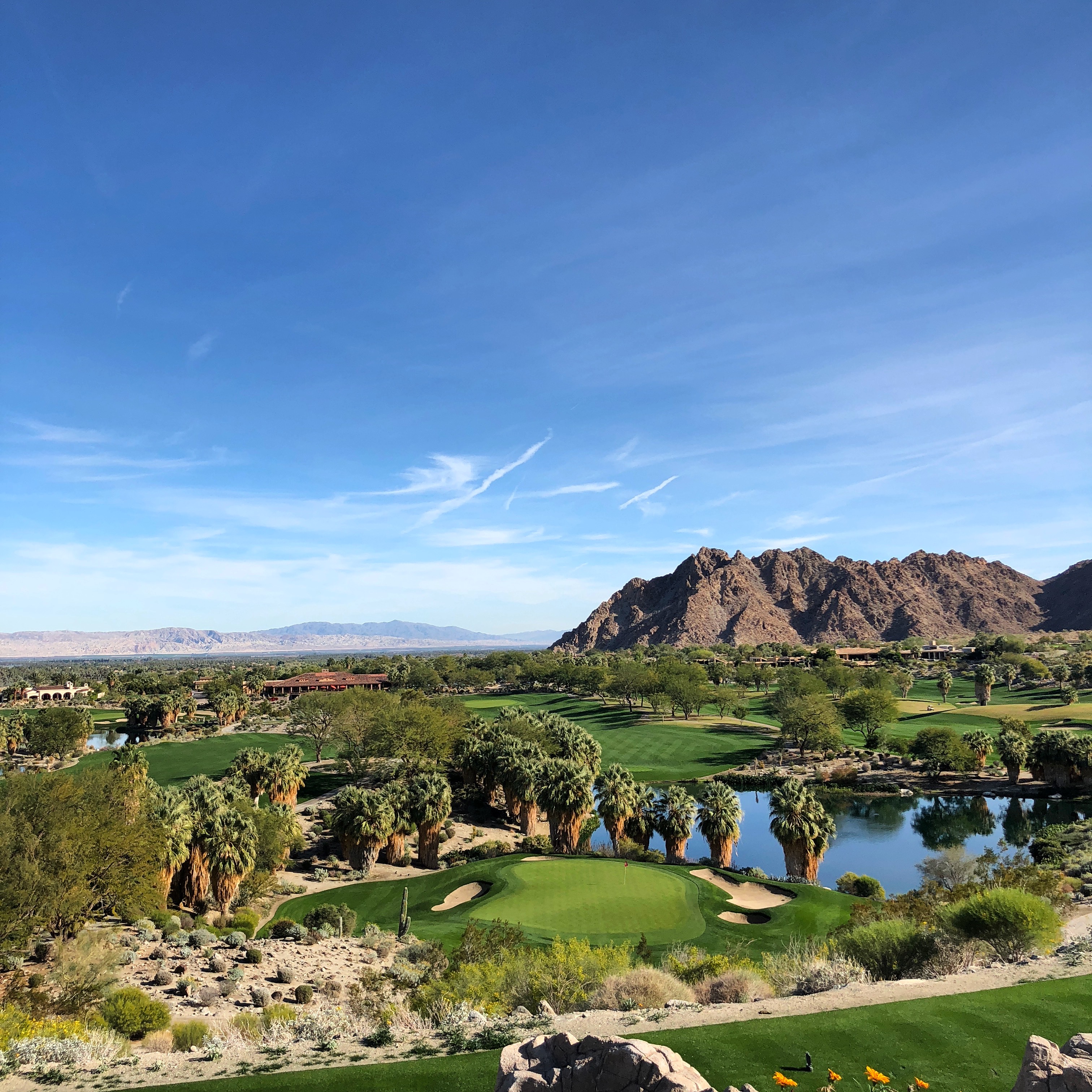 I’m not really sure how this hole is either loved or hated. I’ve seen mixed reviews about it, and I don’t see it. It’s a lovely par 3 with a good back drop on a tough piece of land. Certainly an interesting hole and great for variety within the set of 3’s.

The 9th is perhaps the most “Palm Springs” feeling hole, with a pond turning into a stream running up the left and palm trees scattered.

I felt like this green featured some pretty cool movement. Nothing too crazy, but just some good subtle undulations. 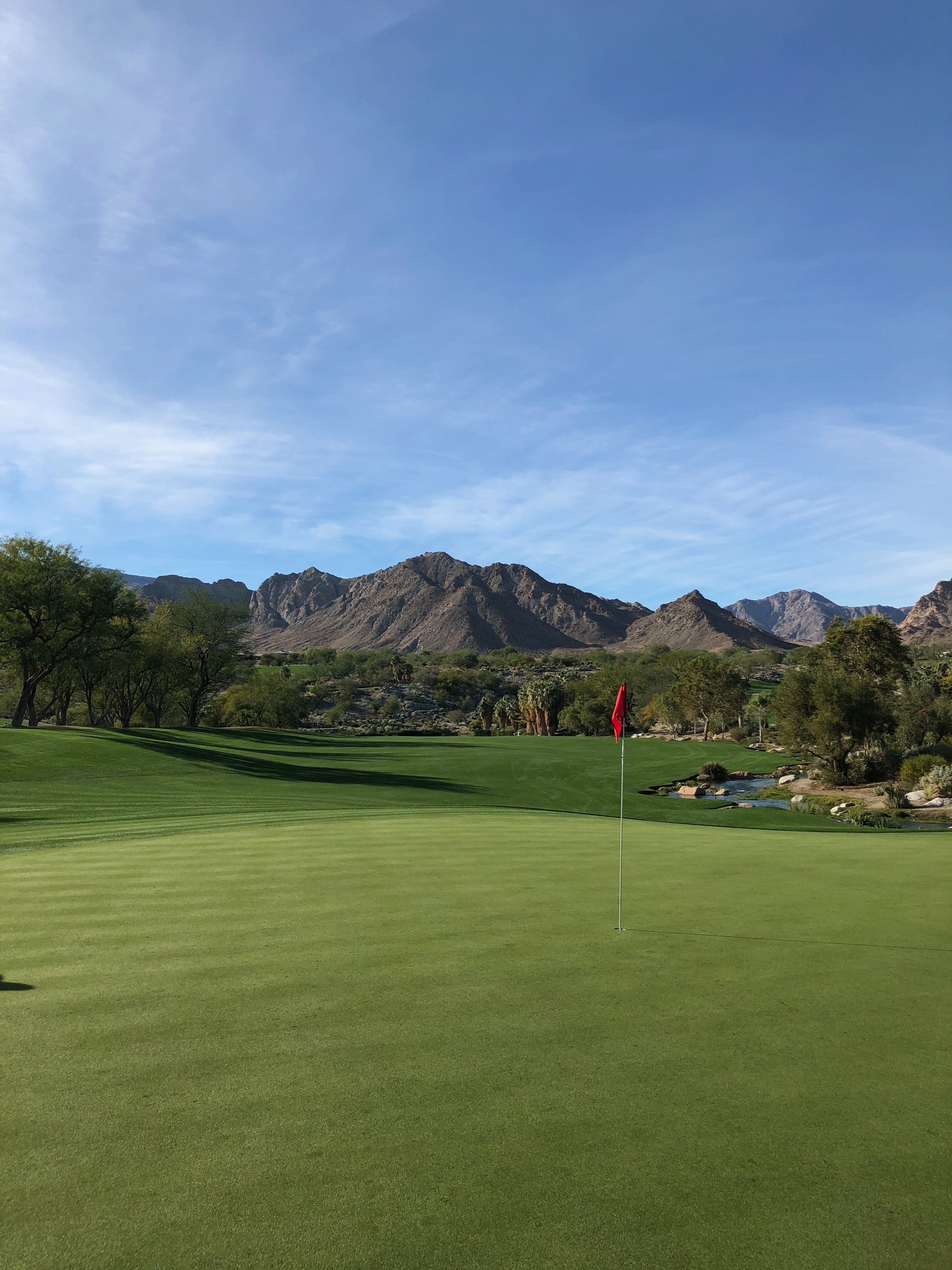 After making the turn–and grabbing a milkshake, which is a must (they deliver it out to you so you can continue your pace!)–you arrive at the amazing par 5, 10th. Playing slightly more than the 521 yardage suggests, a creek runs up the right side. It’s clearly artificial, so golf purists and snobs might not enjoy it as much, but it doesn’t feel that out of place and is a nice addition to the vibe of the place. 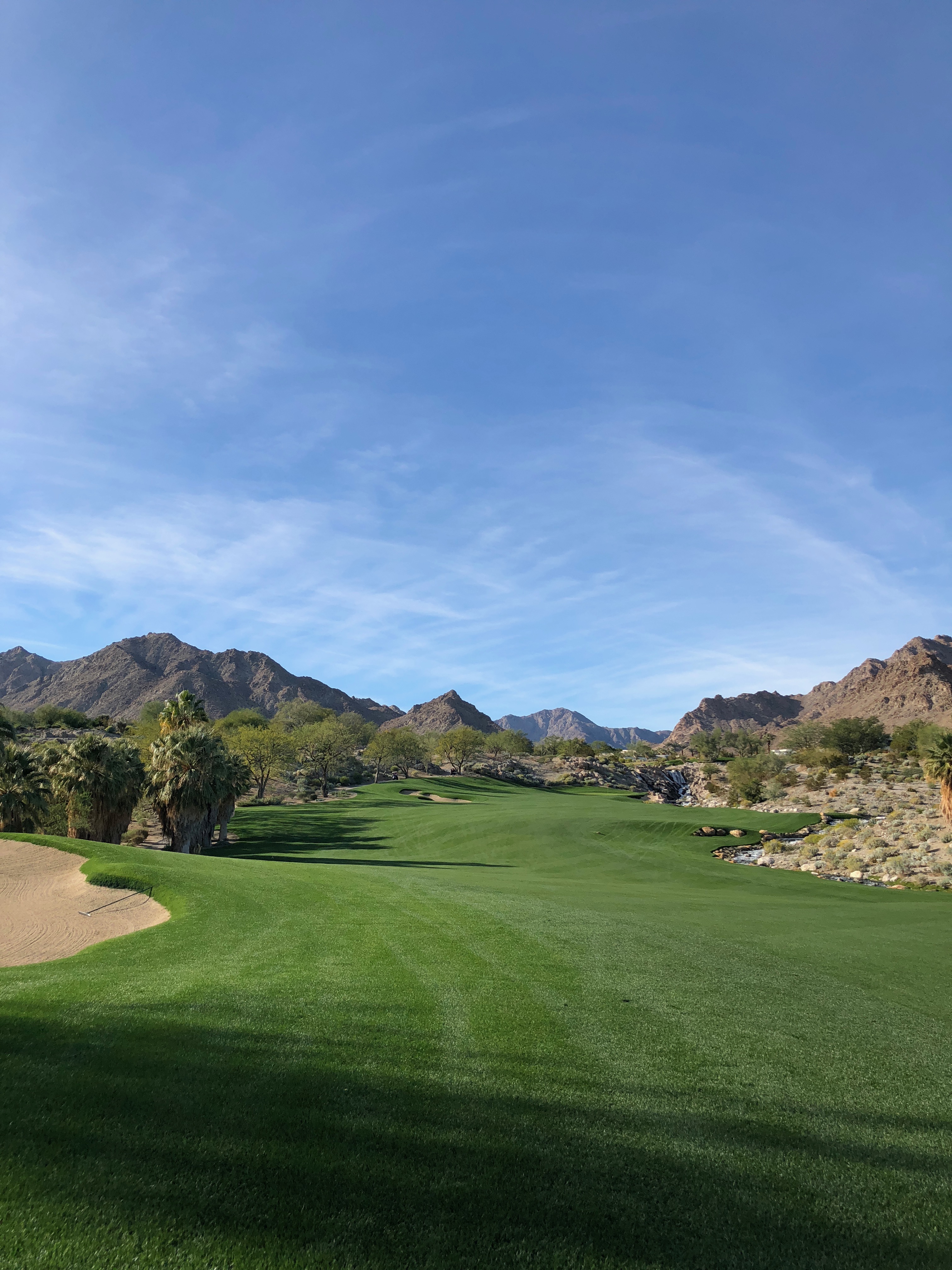 This is a really neat green site, sandwiched between desert left, rock long, and the creek to the right. A waterfall is also in the backdrop, and is certainly memorable. It’s the first waterfall I’ve seen on the course, but it’ll be hard to top this one. 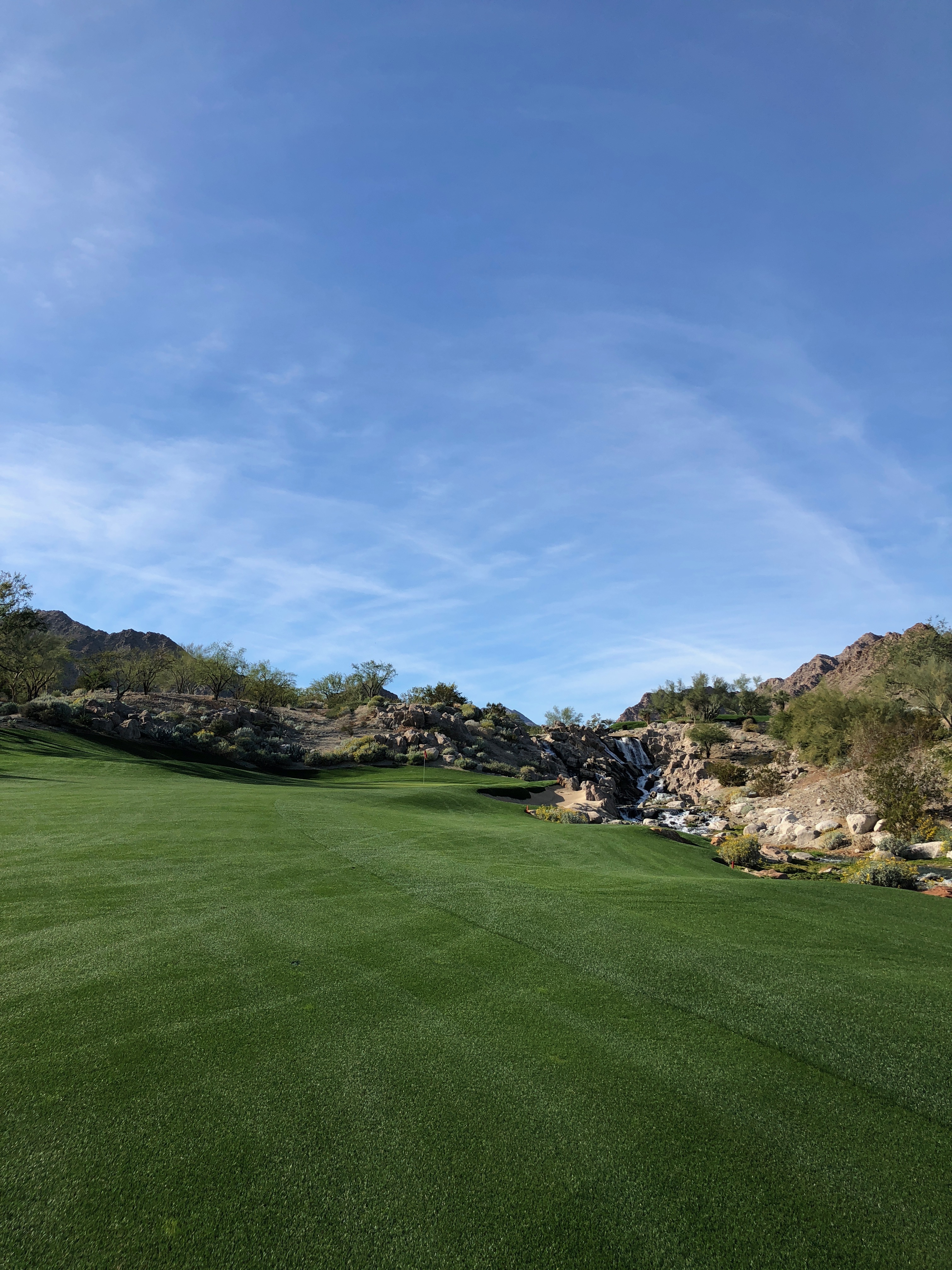 The 11th is a fairly forgettable 400 yard, par 4. A slight dogleg that moves up and to the right.

The 12th starts the stretch dubbed “the cove,” a four hole stretch in the very back corner of the property. Once you arrive back here, it’s honestly shocking. You feel so secluded from civilization and it is so quite. Truly the most peaceful place on a course I have ever seen. Take a look below at an arial view of the cove: 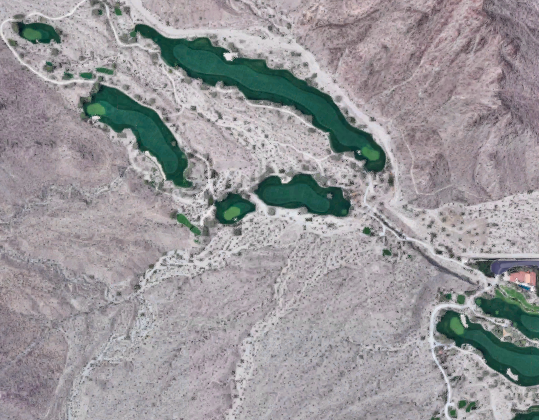 The 12th plays close to 400 yards. I felt like it was the weakest hole in this stretch. The sight lines are weird and you’re not really sure where to go.

The 13th, however, was epic. A really good short par 4 at 352 yards, this hole bends significantly to the left. A bunker on the inside corner of the dogleg and a desert wash left are the main challenges in the hole. 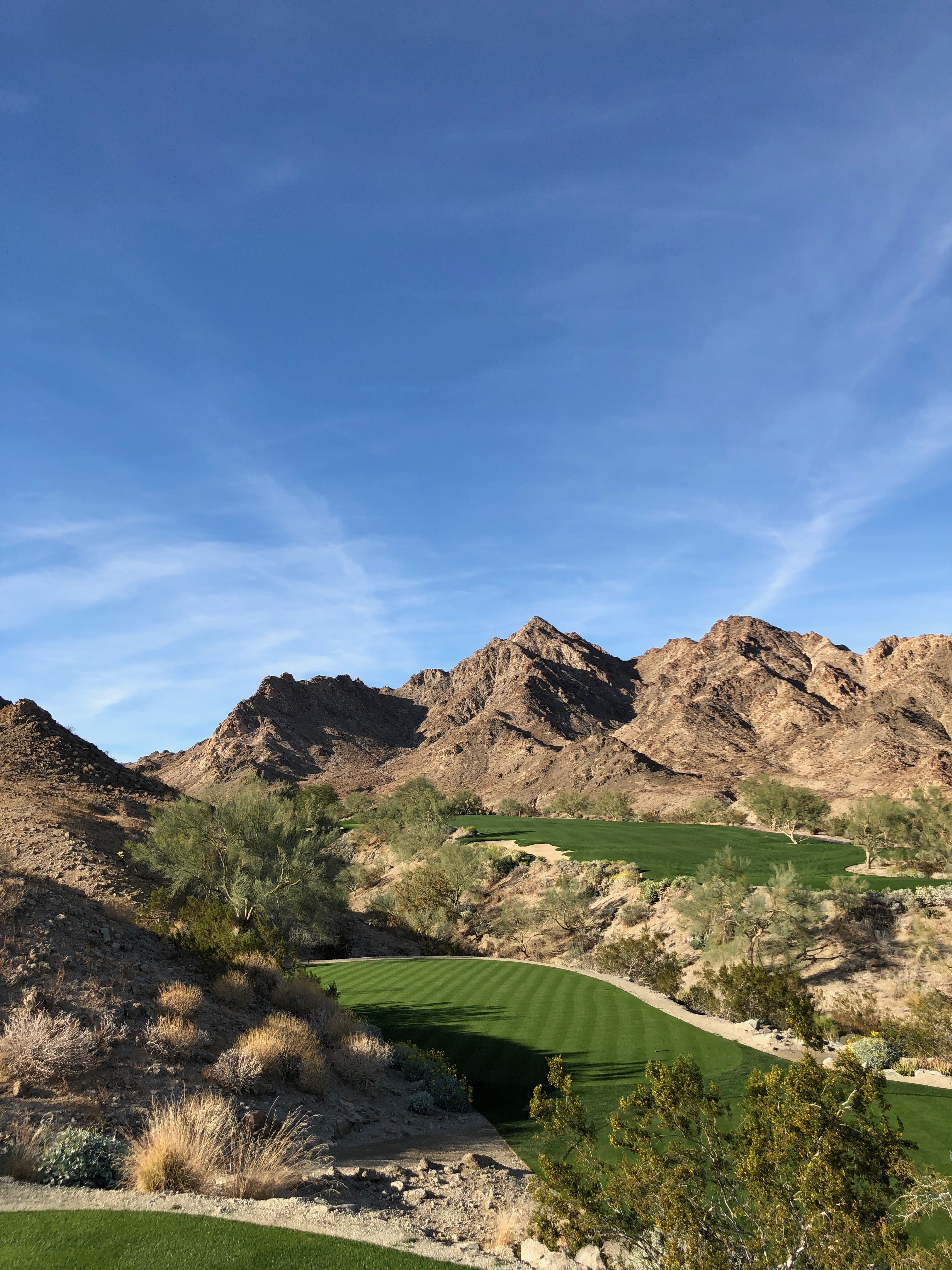 The approach is also cool. It sets up for a draw, thanks in part to the angle of the green and a bunker short right. A good view with a mountain backdrop also awaits the golfer. There is a few shrubbery and trees in the background which I’d like to see cut down to open a more unobstructed view of the mountain range. 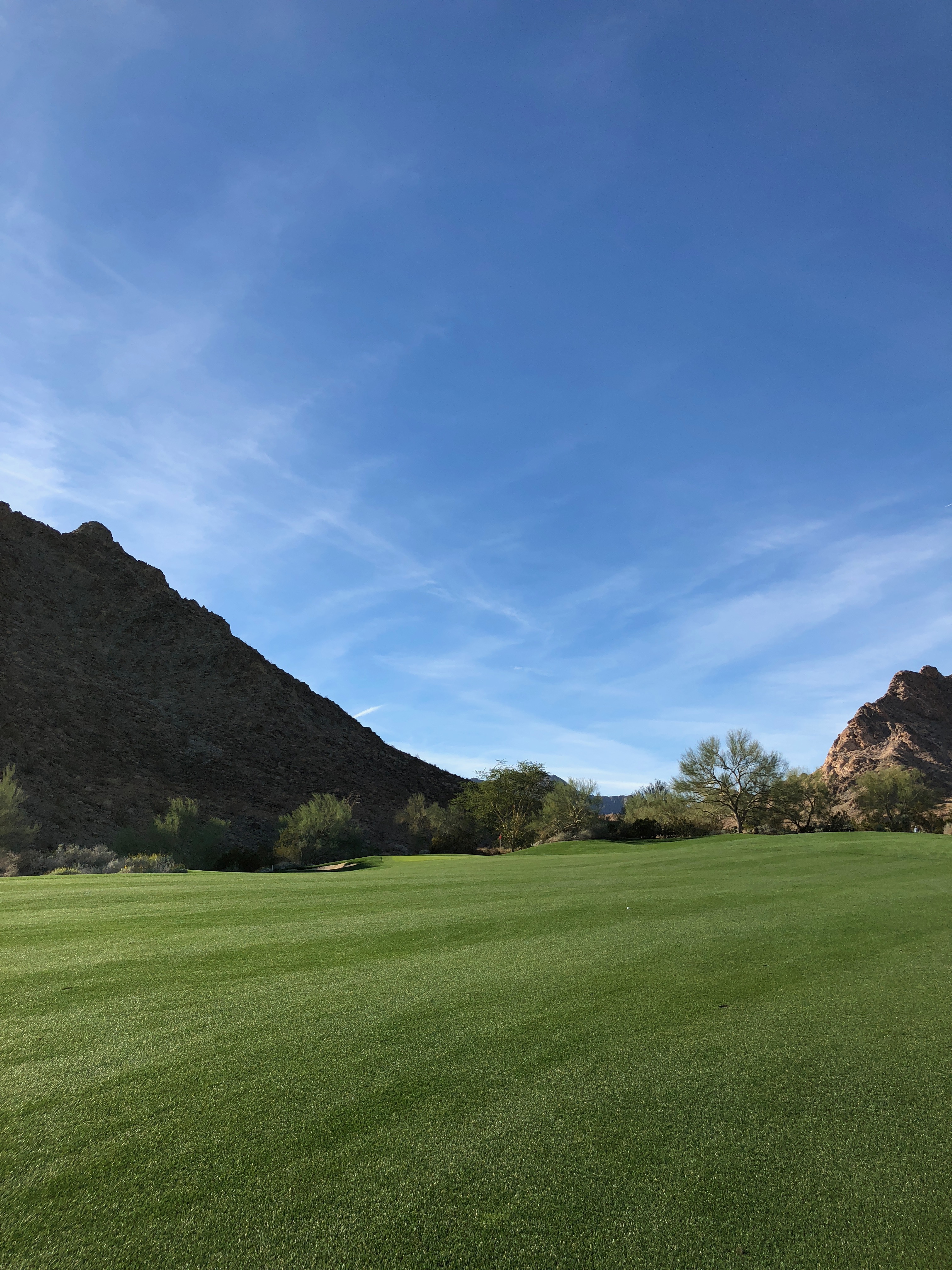 The 14th is mid length 3, playing 173 yards from the back deck. This is the farthest west and north point of the golf course, and also the farthest point from the clubhouse.

The 15th is an interesting par 5. It plays fairly long at 615 yards, slightly downhill. It moves barely to the right around some desert foliage and trees. I felt like this hole played a little different than the rest of the course, and some might think it’s awkward. I didn’t mind it at all, really, but I could see the argument. The approach shot was nice, though, to a green sloped back to front and a slightly pushed up green. 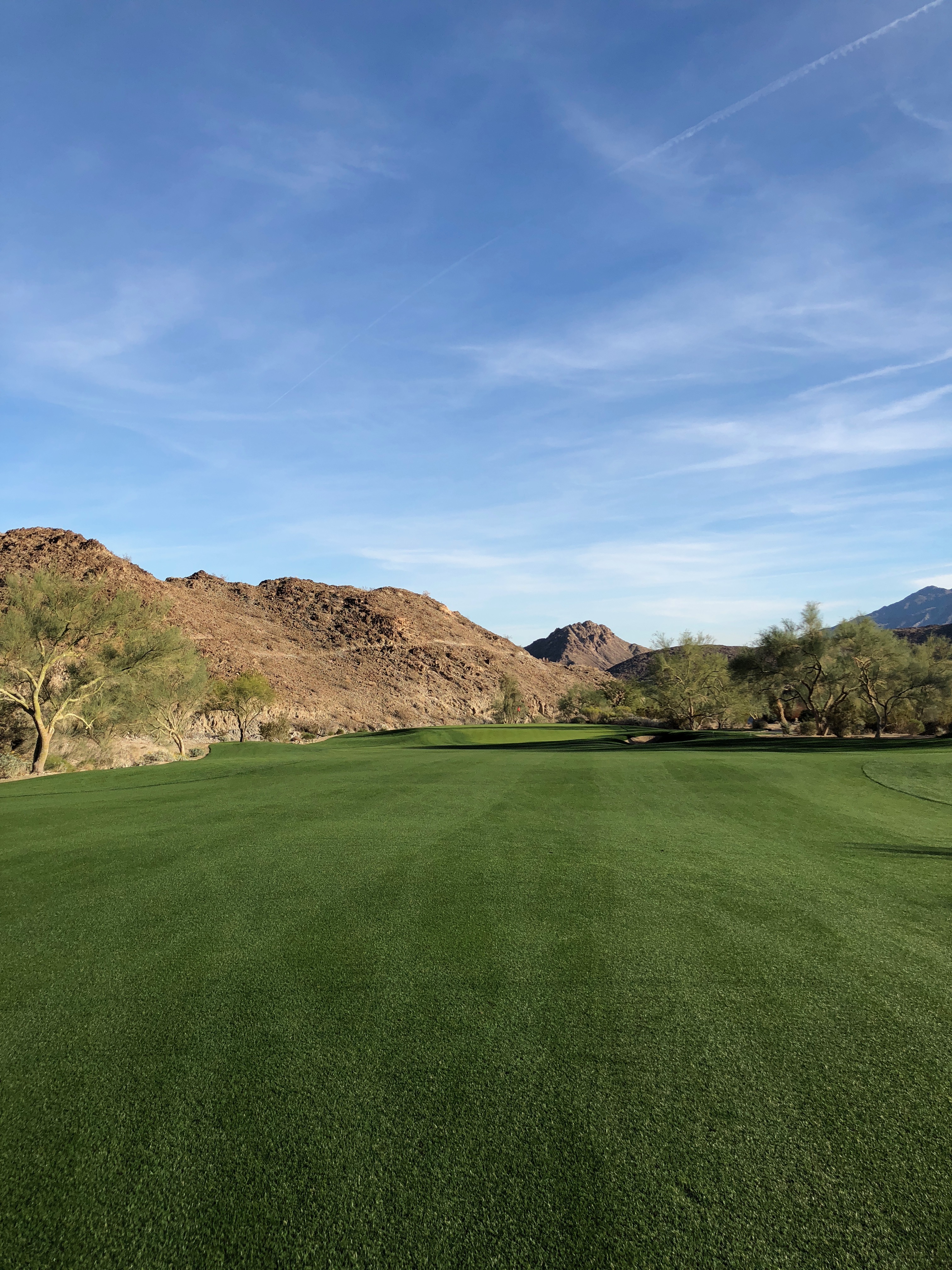 The 16th starts a fantastic finishing stretch. A longer par 4 at 454 yards, a stream runs down the left side of the hole and cuts back across the hole to the right. It’s certainly in play off the tee, but doesn’t come in play on the approach. 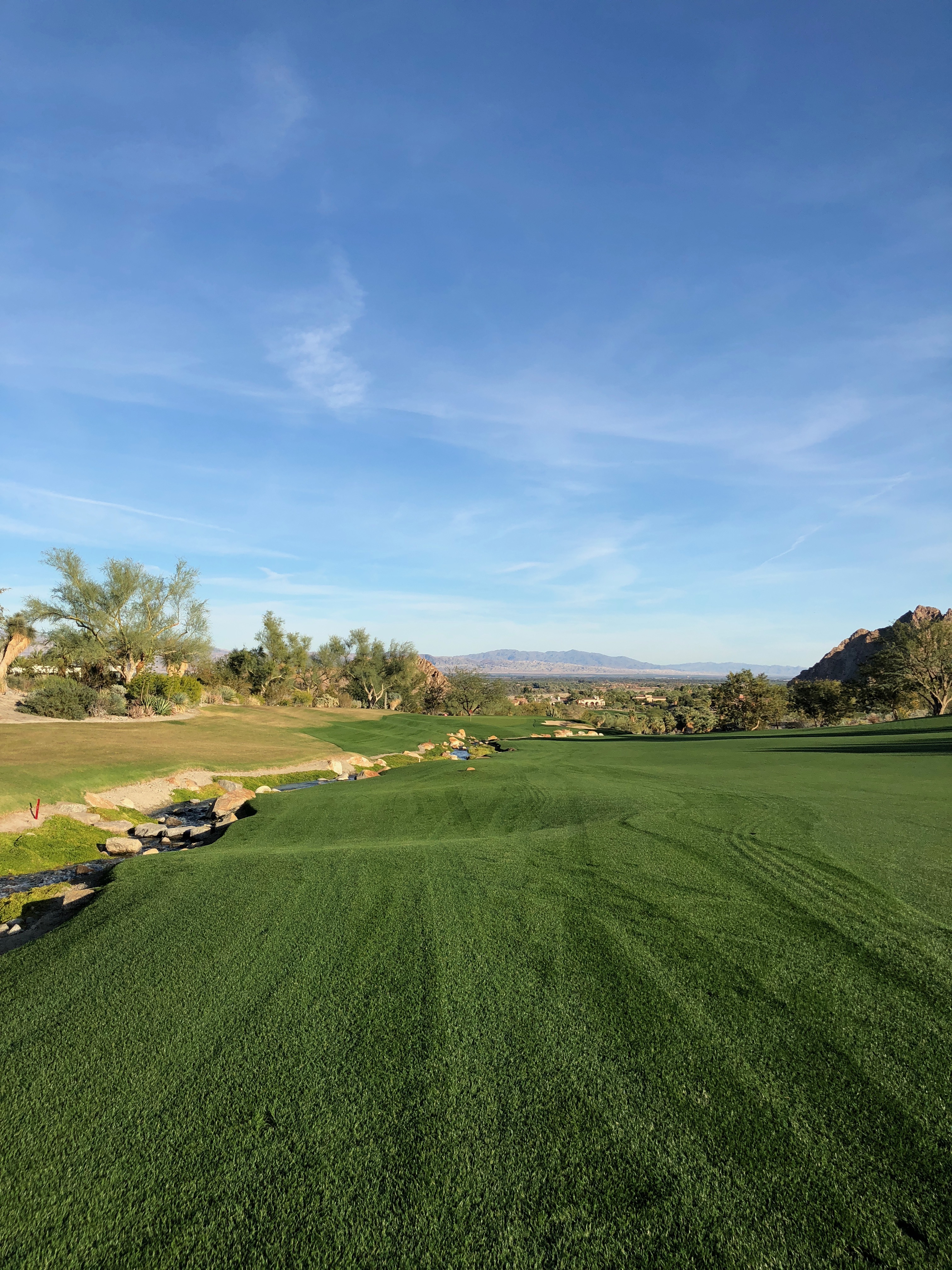 The 17th is a long par 3 at 223 yards. After a lovely walk across the waterfall you see from 10 that I won’t spoil for anyone who will eventually play here, you arrive at a fairly elevated tee box with a fantastic view of the Coachella Valley. 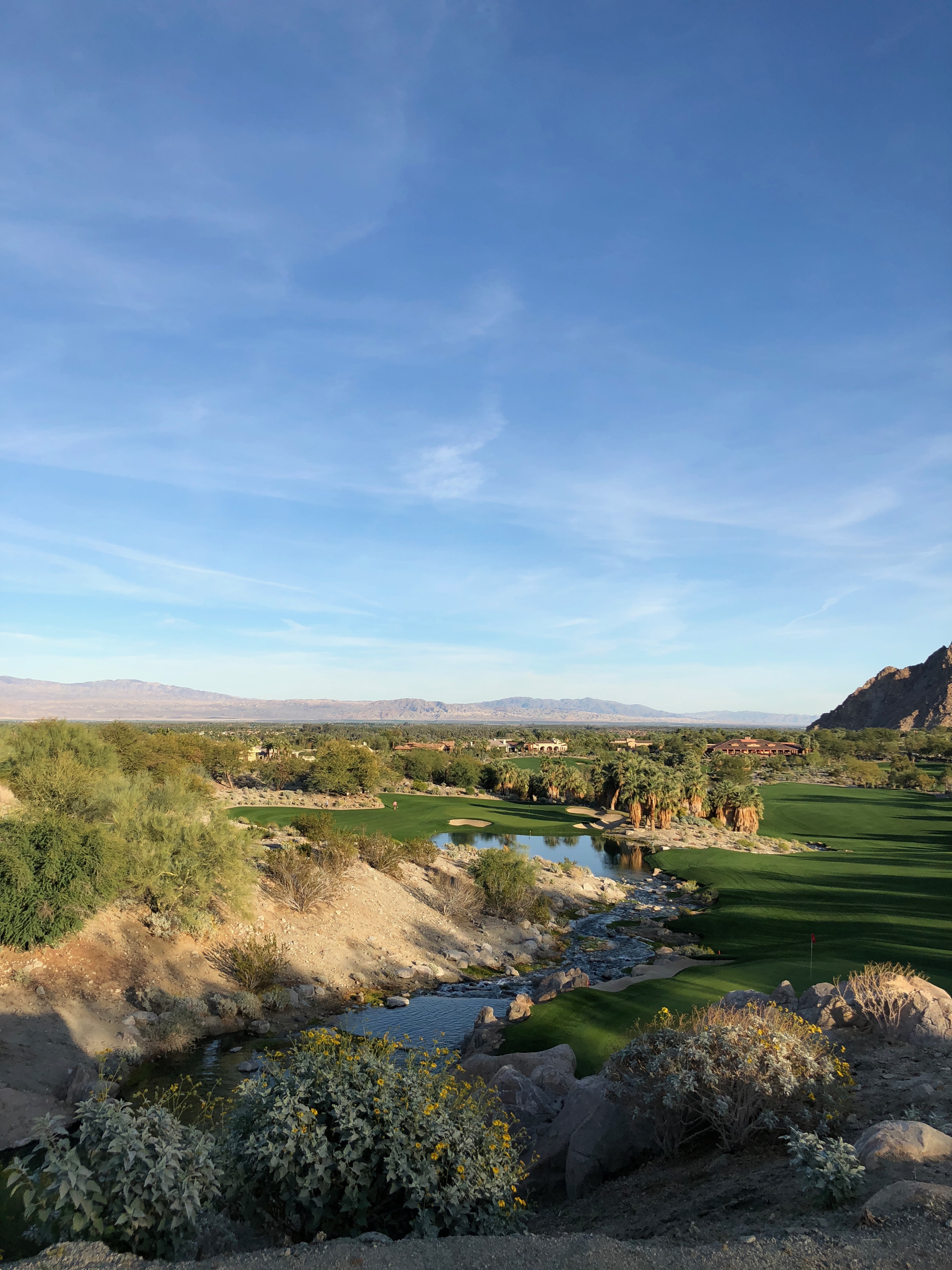 The hole is all carry, but the green is fairly inviting. It still requires a good shot but nothing that makes you feel like it’s impossible to hit the green in regulation.

The 18th, like all the other Tom Fazio courses I’ve played, is a meaty par 4 finisher. 470 yards, it plays just a tad downhill. It’s a pretty straight hole, but with a bunker left side in the driving area, and a water hazard and a few bunkers on the right side of the green complex, it doesn’t lack hazards to avoid. 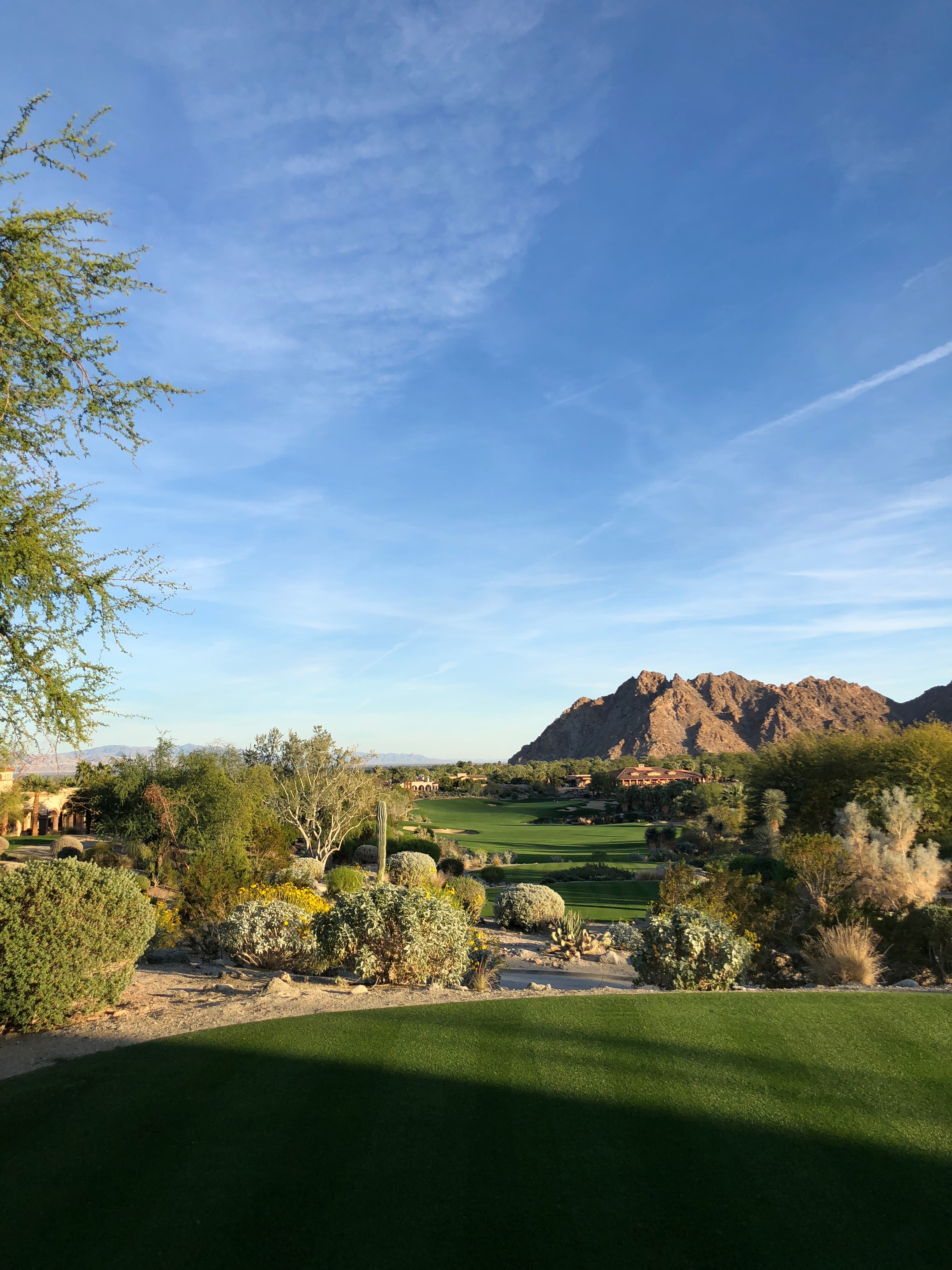 The approach is beautiful, and it’s hard not to have a smile on your face as you finish this round. 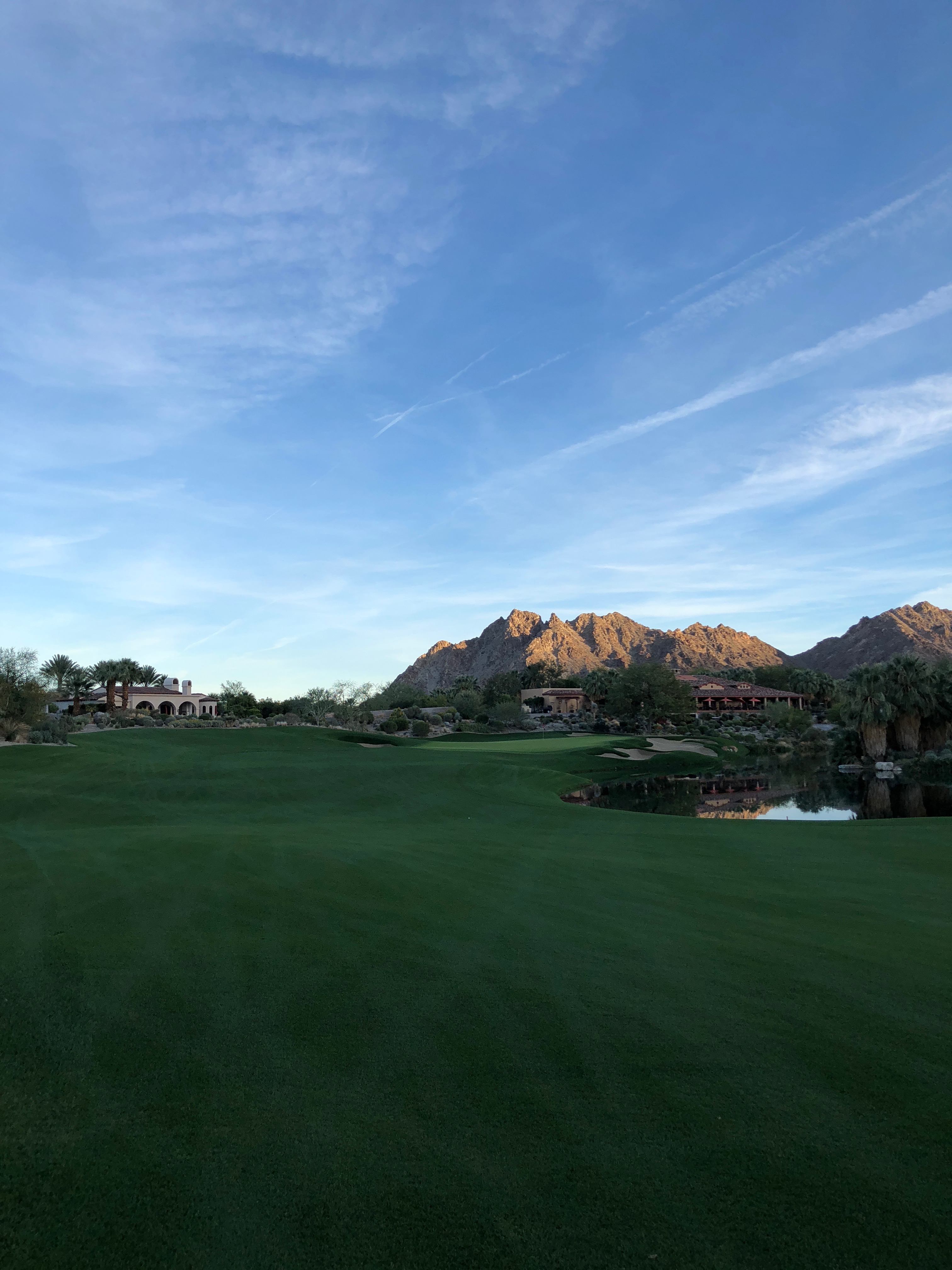 There’s no doubt that Quarry is a treat to play. The beauty, scenery, and vibe of the club makes this a round to forget. There are parts of the course that almost play too easy, like the Faz was trying to cater to the 30 handicap too much, that it feels arguably boring. It’s certainly a beautiful course, but it almost borders on lacking interest. That, or maybe the waterfalls, mountains and creeks distract you so much.

Either way, there’s no denying The Quarry at La Quinta is a good golf course and a treat to play. I really loved the overall experience and it was a fantastic round. If given the opportunity, I would absolutely return. Between the putting course, par 3 course, the actual course and the milkshake (it was really so good), you could spend a full day here and never be bored. Next time you’re in Palm Springs, see if you can play Quarry–it’s worth it!