When you think of Phoenix public golf, immediately Troon North, Quintero, Boulders, and We-Ko-Pa. The 36 hole facility just outside of Scottsdale featured the Cholla course, and the Saguaro course, a 2006 Bill Coore & Ben Crenshaw design in the desert.

As per usual C&C designs, the layout is understated, and perhaps one of the more understated designs around. Expansive fairways, strategic bunkering and wild greens are Saguaro signature, and features numerous drivable par 4’s.

The course starts out with a mild par 4, even though it measures at 469 yards. The fairway is pretty big so rip away. The second hole, makes you think right off the bat, with a drivable par 4, measuring 316 yards from the back deck. The right side is bunkered pretty heavily.

The third is a mid-length par 4, measuring at 416 yards, doglegging to the left. A bunker on the outside of the dogleg that should be challenged for an ideal angle.

The fourth is a big par 5 over some awesome, rolling desert land. Upwards of 631 yards before you hit the middle of the green, this tee shot is semi-blind with a bunker right centre of the fairway that’s 259 yards to carry and is a good line.

I found this hole to be really, really good. Abundant options off the tee, and a lot of room to the right with a layup, however, makes the approach harder with a pretty big bunker short right of the green.

The 5th is a mid length 3, measuring 160 yards. This green is really nasty, with two bunkers–short left and short right–and pretty big contours. The tee shot is really understated, and a common theme at Saguaro, but should not be underestimated. 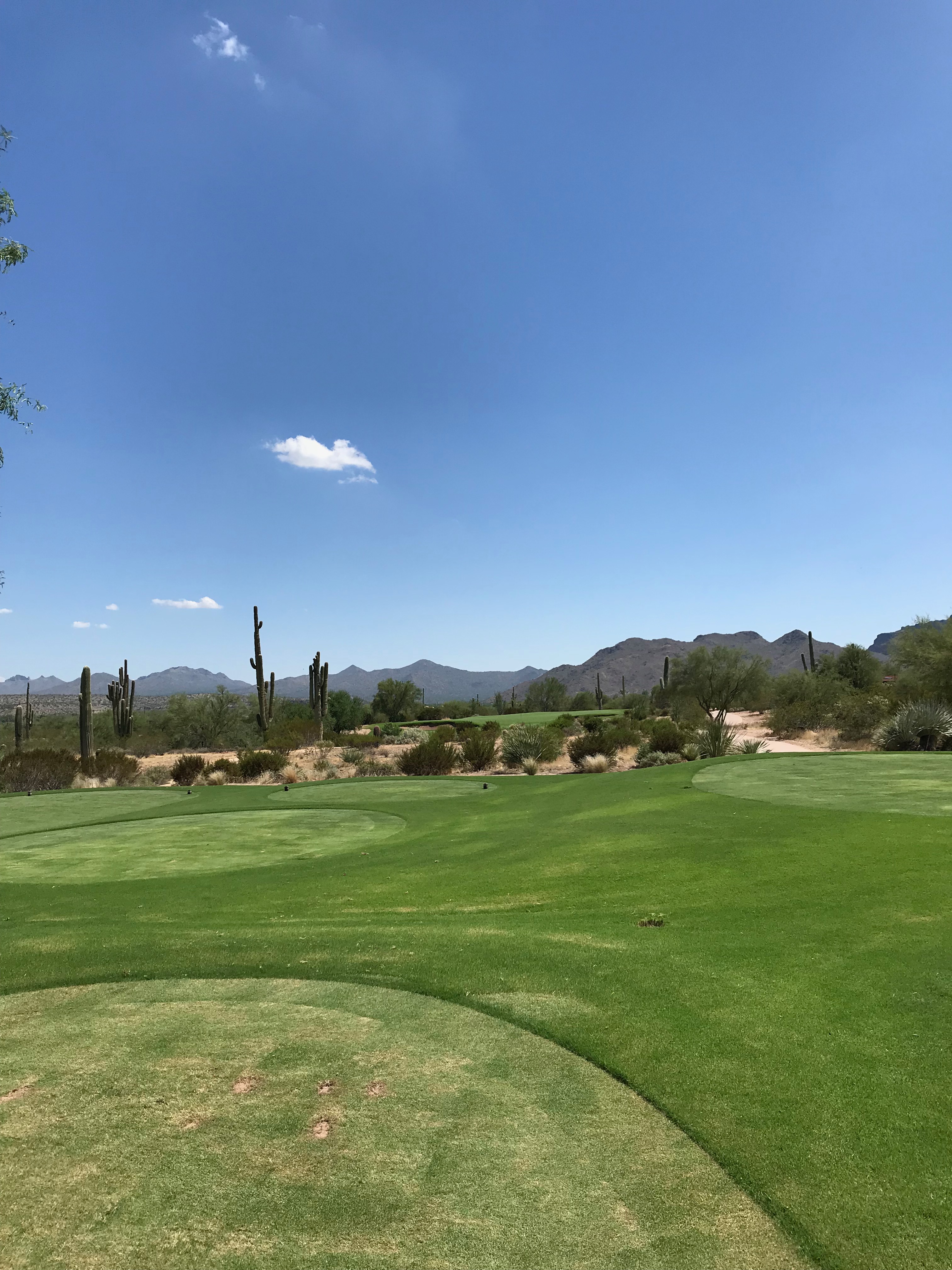 The 6th is a mid-length 4 at 442 yards. Two bunkers that are 300 to carry both of them are on the inside corner of the dogleg, but with a bunker-less green complex (and short grass surrounds), the player is encouraged to rip at the drive.

The 7th starts my favorite stretch on the course. Another Coore/Crenshaw signature half-par hole, this par 4 plays 314 yards, playing slightly uphill. The layup is incredibly easy, but going for it challenges the player more. A bunker approximately 270 carry off the tee is dead centre of the fairway, and a really funky green complex challenges even the best wedge players.

The 8th is a great short par 5, with a really cool tee shot bending to the left, playing uphill.

The approach plays more uphill than the tee shot, and the green is angled front right to back left with a bunker left side and two on the right side. The layup area features two bunkers, and one bunker closer to the green to catch weaker shots going for the green. Below is a few views up to the 8th green.

The 9th, is the third short hole in a row, but this time is 137 yards, playing as a par 3. This green is devilish, with a front and back-right tongues, as well as three deep bunkers surrounding this green. 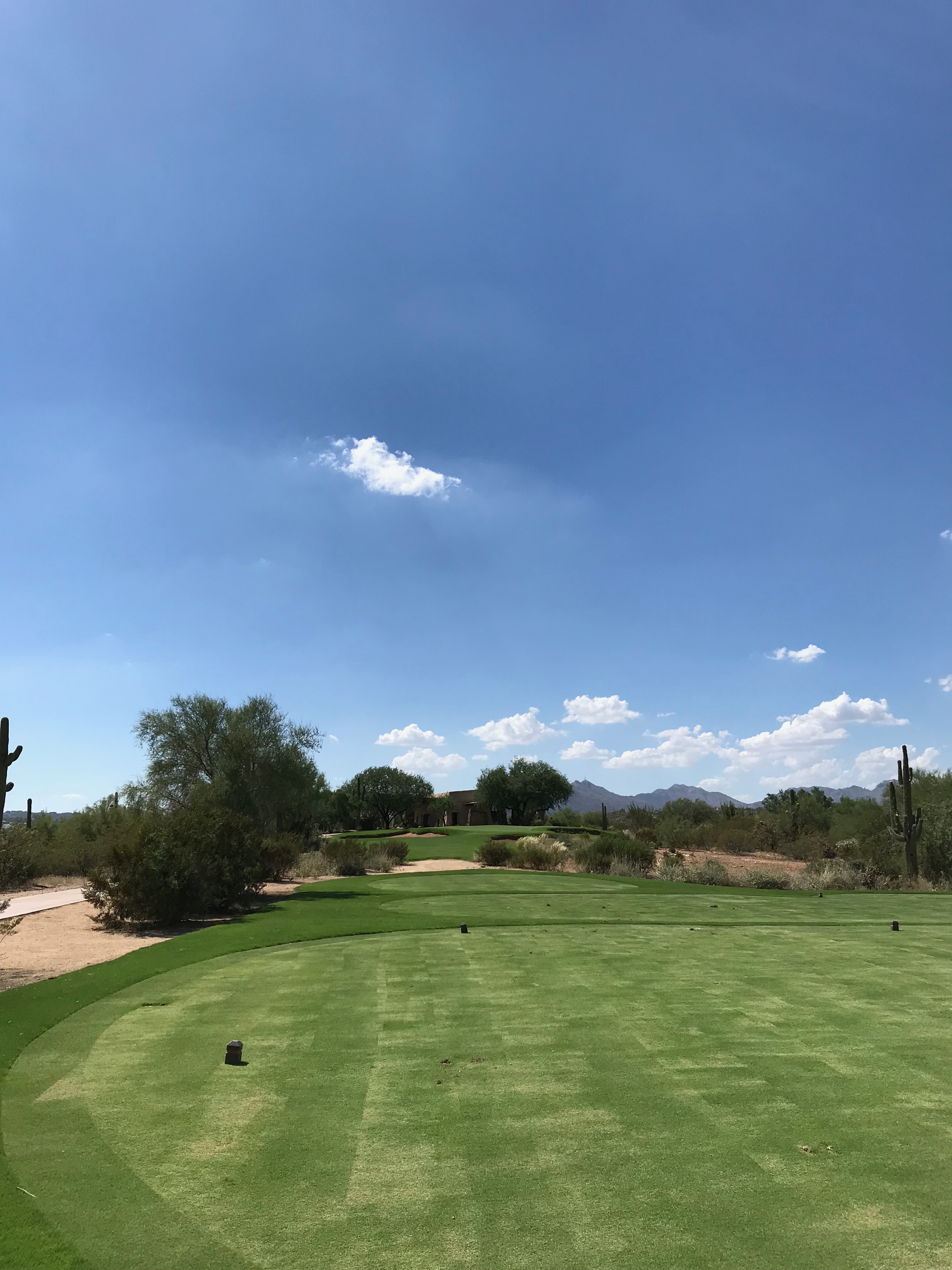 I thought the 10th was the best architecturally significant hole here. A Lions Mouth template, which has become a Coore/Crenshaw staple, really makes you think on the tee. If the pin is left, you want to hit it left with driver or layup, and if the pin is right, well, vice-versa.

I would focus on where the pin is each time you play. It changes the strategy of this hole significantly.

The 11th is a beautiful long par 3, playing upwards of 200 yards. The bunker is guarded by two bunkers on the right and a chipping area left. A bunker short left isn’t in play, but helps the overall look of the hole.

The 12th is a long par 4 with a pinched fairway by 3 bunkers–two left, one right. All of them are in play, and this is likely the most difficult tee shot on the course. Even though the hole is 476 yards, 3 wood at the right bunker isn’t a bad play. A bunker short of the green is intimidating from the fairway, but it’s short of the green and doesn’t come in play.

The 13th, another long par 4, playing similar yardage at 470 yards, featured 1 bunker in the fairway that does come in play and is 290 yards to carry. Make sure you hit it to the left for a good angle, as a deep bunker guards the front and right side of the green, making any approach from the right much harder than the left.

The 14th is an all-world par 5 that is among my favorite and the very best par 5’s in the desert. At 540 yards, it is reachable, but the tee shot is pretty difficult to decide which fairway to hit: left, or right.

The left is a way easier fairway to hit, but the right sets up better visually, and with the green behind the right side fairway, one almost feels inclined to hit it right. Below is the two views from the fairways, left and right.

I found for a fade player (myself, included) the right fairway was easier visually so I hit it down the right. You also gain a better angle into the green as the left bunker doesn’t really come into play.

The 15th is a monster par 3, close to 260 yards fully stretched out, but with its redan-style layout and the downhill topography, the player can hit it close to 30 yards short and see the ball bounce towards the green.

The 16th is a short hole playing uphill and doglegging to the right. On the card it could be drivable at 330 yards, but it plays significantly uphill. 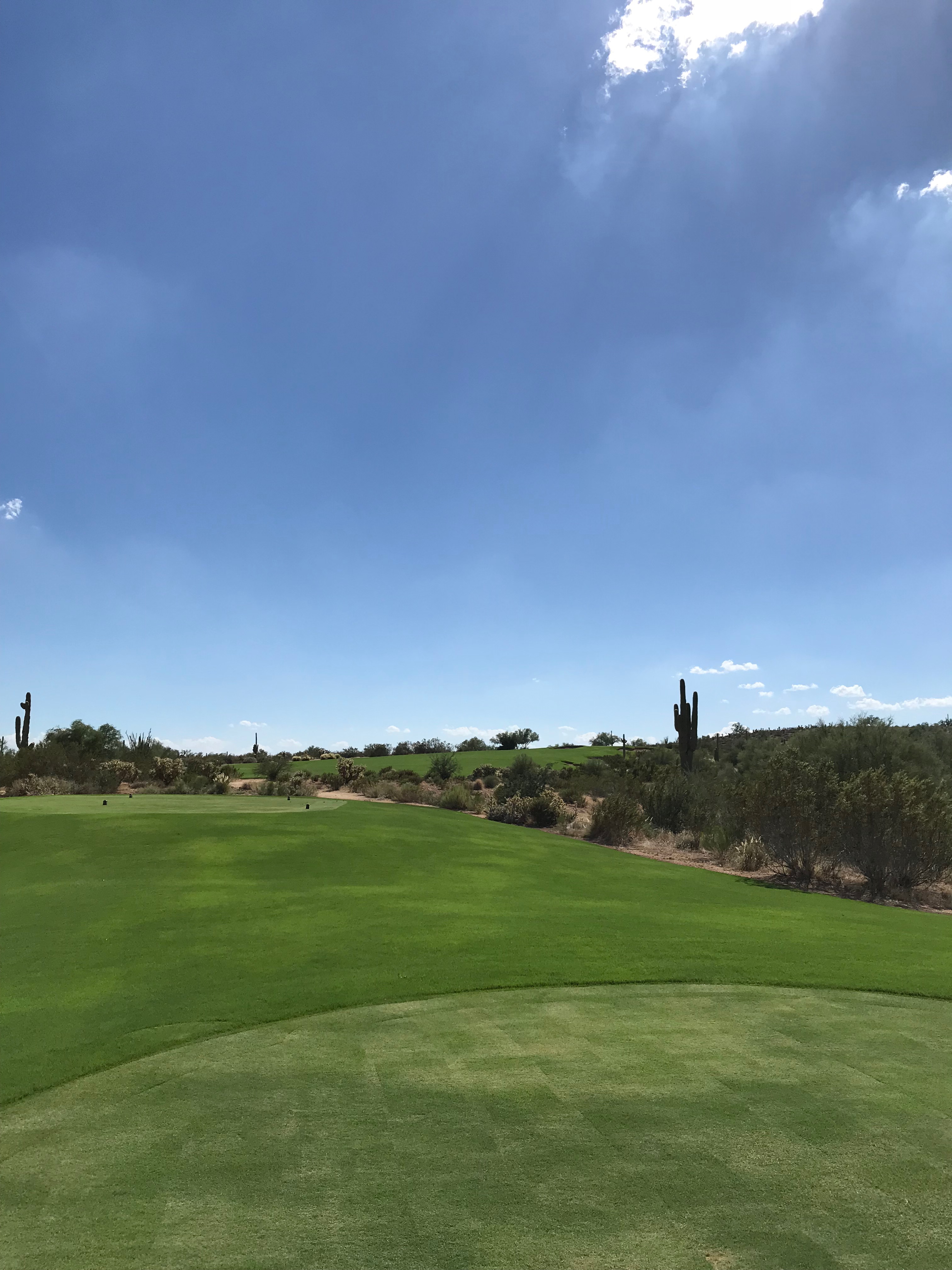 This is another great strategic hole, with a massive bunker short left of the green that makes the approach from the left way harder. On the flip side, the inside corner of the hole features 4 bunkers all the way up the hole. Essentially, the player is forced to pick which shot he wants harder: the tee shot, or the approach. The left picture is from the left side of the fairway, which is more inviting, and the right from the right side of the fairway.

When you arrive at the green, you look back and see the scale of this hole, a rarity for a desert golf and a good mix in variety.

17 is a breather before the beast that is 18, with one small bunker 313 yards off the tee on the right side of the rough, and rolling topography. You can get some interesting lies that bring in the bunkering complex short left, but for the most part this is a fairly approachable hole.

18, however, is a monster finisher. This is the only hole I’ve seen Coore & Crenshaw build over 500 yards as a par 4, playing 508 yards from the very back deck. A massive fairway, slightly moving to the left, has a couple bunkers 250 yards to carry (that is the ideal line). 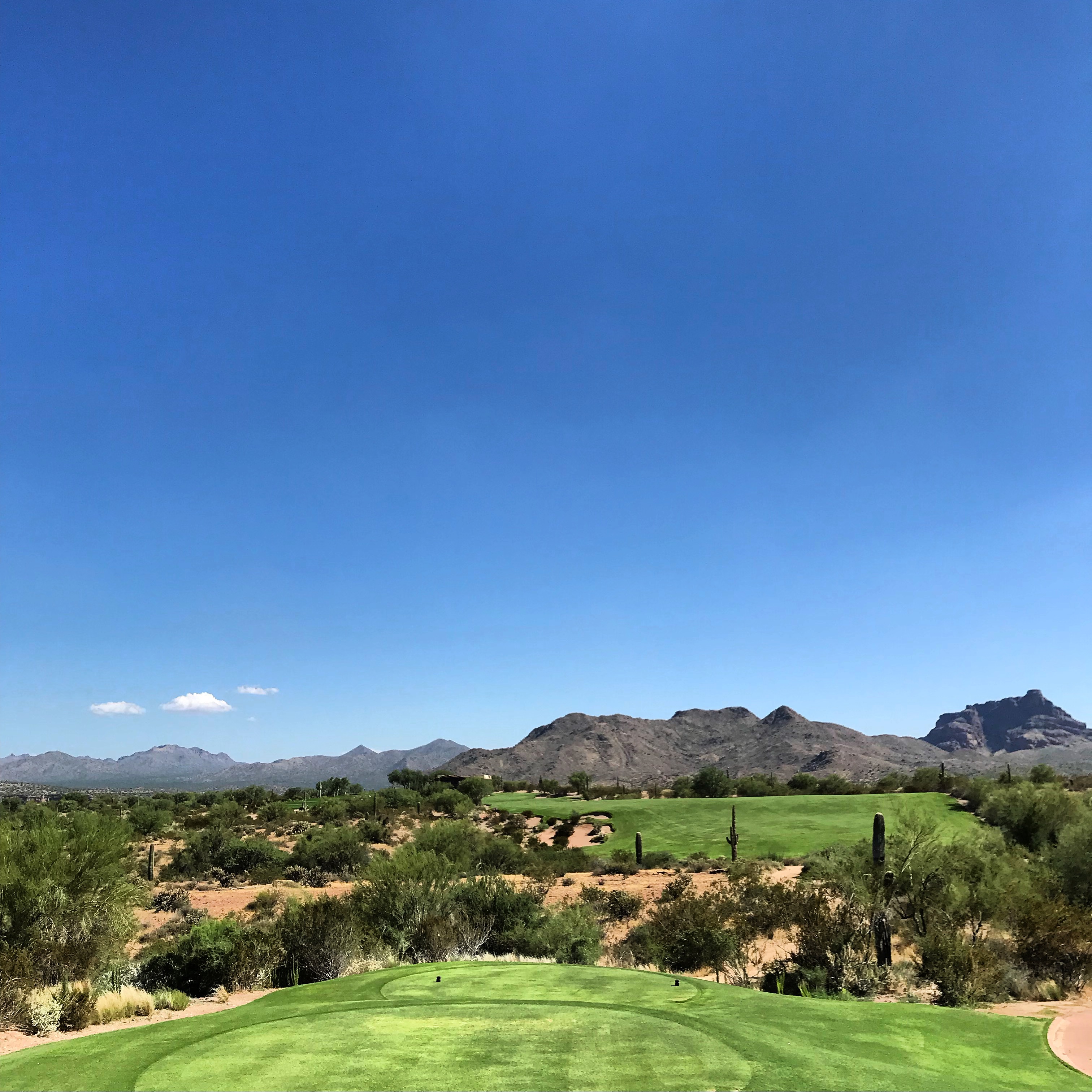 A second bunkering complex starts at 350 yards off the tee, and with firm and fast conditions it is in play. The bunkers run up the entire right side of the hole to about 60 yards out of the green. A bunker is centred in the fairway at about 80 yards to the green.

We-Ko-Pa’s Saguaro course is among the stellar desert designs that are hard to find. A spectacular Coore & Crenshaw design, this features some of the best half-par holes I’ve played. Is it the most challenging? No, it’s on the easy side, but with an emphasis on fun, one doesn’t care about how hard it is, unless you’re the Grinch or Rees Jones.

If I had one round ever left in Arizona, it would be a toss up between Estancia, Apache Stronghold, and Saguaro, and I’d likely choose Saguaro. It’s the best of both worlds, and an outstanding design that’s worthy of its accolades. If you miss this course on your buddies trip to Scottsdale, especially for say, Quintero or Troon North, you would be missing out! Get out and play Saguaro!